By Allie DeckerOctober 27, 2021No Comments 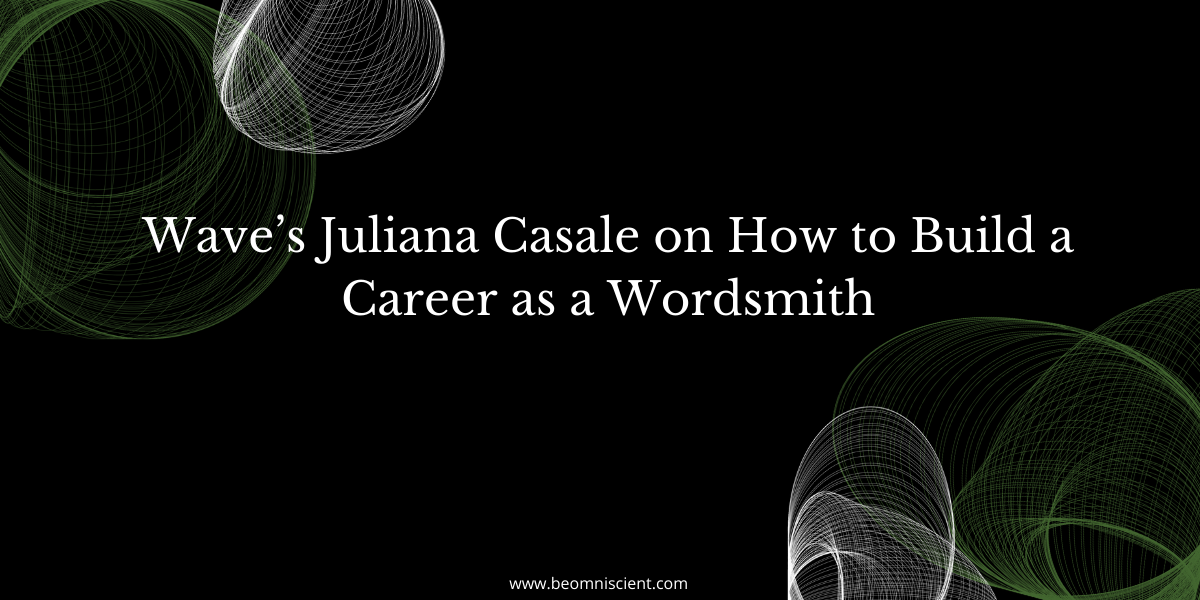 Words and writing are in the blood of Juliana Casale.

The talented content writer and current Content Strategist at money management platform Wave has come a long from the kid who piled up library books and read them under the covers.

Juliana has held multiple content roles at a handful of small and mid-sized B2B SaaS startups and has run her own freelance business.

Throughout the range of positions and companies, there’s been one common thread: it’s always revolved around words.

Early in her career, Juliana held a job that required no writing at all. She made a point to seek out writing work, even though it meant working for free.

So when Americancraftbeer.com was looking for a Boston correspondent—where Juliana lived at the time— he volunteered.

She did get paid, in a way: with free passes.

“I got to fly to Denver to go to the Great American Beer Festival there. I got to cover Bonnaroo as the beer correspondent three years running. So that was well worth it,” she said.

She also picked up crucial interviewing skills that have served her well.

“I didn’t really know very much about beer. So I got to ask the stupid questions and get the answers that most people would want.”

Bring humility to the director role

Juliana’s a natural fit for her latest director role at Wave, because she’s made the journey from grunt work (AKA individual contributor) to manager to director overseeing the worker bees.

That’s why she feels so lucky to have a job that lets her have the best of both worlds: manager and contributor.

“I found myself being pushed that way, from contributor, to manager, to director. And I didn’t really want to do that. At the end of the day, it’s a different skill set,” Juliana said. “There were some days where I was just like, I want to do the work again.”

One of the factors that defines her role as Content Strategist at Wave is that she can still have her boots on the ground.

“At Wave, my position gives me the overview of everything that’s going on in the company and the priorities that need to get done. Yet I can also give very tactical feedback on the content and do more of the art direction. It’s a nice balance,” she said.

Delegate to keep your focus

Just because you can do everything doesn’t mean that it makes sense to do it. A game-changing perk of working for a larger company is the ability to hire specialists.

A large company can afford to diversify their team, so a sole content writer isn’t doing all the time-consuming technical tasks associated with content, like SEO keyword research.

“We have an SEO specialist, and she’ll be running the content audit or competitor analysis and feeding that insight to me,” said Juliana. “And then I can take that and synthesize it to produce articles or videos.”

This means Juliana doesn’t have to do too many things outside of what she wants to focus on, delegating essential tasks that would otherwise eat away at her time and attention.

Thanks to her background at smaller companies (Wave has about 300 employees) Juliana knows what it’s like to have to juggle a plethora of responsibilities without having the time or peace of mind to focus on your actual job.

“We’re still pretty lean, but we do have dedicated resources. I’m free to really hone in on what my role is supposed to be,” she said.

Even with specialists to take over the technical tasks, a leader needs to be the one to set priorities for their entire team.

How do you know where to start?

Juliana’s method is to look for the most pressing need.

“The framework of ‘is it on fire?’ is a good one,” Juliana said, only half joking.

What constitutes a marketing asset that’s on fire? It no longer represents the brand and its current offerings, yet prospective customers still review it and evaluate the company based on it.

“When you have stuff on fire, you want to be able to focus on them and get them down to smoldering as soon as possible.”

At Wave, it was the website that was in desperate need of attention, which is why Juliana made it her priority since her first day on the job.

“Before I joined Wave, the website hadn’t been touched in at least a couple years. That’s a little terrifying,” she said.

“Think about how branding changes over time, new products or features to talk about. There’s a lot that’s evolved, and the website hadn’t caught up to that.”

Because a company’s website is the equivalent of its online business card, every day that passed without updating it was a missed opportunity.

As much as she relishes focusing on what she does best, Juliana doesn’t believe in shying away from a challenge.

Rather, when faced with a daunting yet exciting project she’s never done before, she’ll say yes first—then figure it out along the way. And she’s usually happy she did (at least once the project’s over).

For example, there was the time she agreed to produce a video with actors and multiple settings for the FinTech company she was working for. It was a far cry from the explainer videos that she’d done in the past.

“I was just really stressed about it,” Juliana remembers. “This project was a beast. I had no video background at all. I regretted saying yes.”

But because she had already agreed to do it, she did it. And, with an enormous amount of coordination and creativity and old-fashioned elbow grease, she did it well.

“These things, where it just seems impossible, it seems so big—and you just take it one bite at a time and get to the end product. You’re just really amazed at yourself and proud of the results.”

Gain confidence in your worth

While work accomplishments—like a successful, engaging video—are a badge of honor, it’s important not to define yourself by them, said Juliana.

Some of the best advice she’s ever gotten was: “Don’t tie your worth to your work.”

That’s why it’s vital to know your value.

Freelancers tend to get good at this, said Juliana.

“Being your own boss is a whole other challenge, but you own your worth and you can absolutely forge your own path if you have to,” she said.

That leads to a fiery confidence in yourself and your abilities.

“Just knowing that you’re good at what you do and owning that is so important for your confidence.”

This professional confidence trickles down to how other people see you—and what they’re willing to pay you.

“When you’re negotiating salary, if you have that confidence in yourself, you’re going to advocate for being paid what you’re worth.”

The key to true career success is learning how to determine what projects and opportunities are worthy of your time, attention, and professional energy.

040: From Journalism to Marketing and Keeping the Human Element in Mind with Chelsea Castle (Chili Piper)

Ross Hudgens on How to Evolve Your Content Marketing and SEO

038: Evolve Your SEO and Content Marketing with Ross Hudgens