Organic Traffic and Keyword Volume are Often Outdated Vanity Metrics. Here’s What To Do Instead 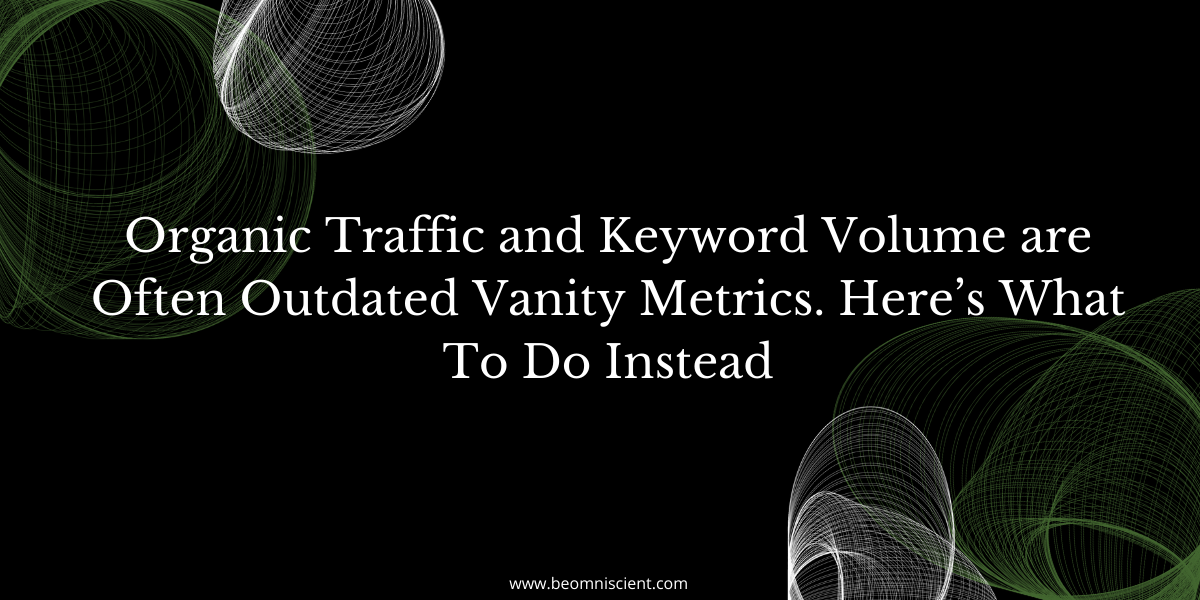 There are many ways to drive traffic to your website. Organic, direct, paid, referral, social—each has a place and purpose in the greater marketing scheme.

Organic traffic has long been held up as the “best” type of traffic, right alongside dominating competitive keywords. The truth? It depends.

All too often organic traffic is driven by surface-level content that doesn’t actually lead to new business.

Read on to hear why our team thinks keyword search volume is overrated, the value of differentiating in a new space, and why traffic diversification is key.

Organic traffic can absolutely be relevant and valuable. But the truth is that it’s easy for organic traffic sources to be surface-level material that is not directly related to your product or service.

“A lot of folks will end up trying to grow organic traffic, but it ends up being really trash traffic. If you can get organic relevant traffic, then that’s the best traffic,” David said.

The key here is that your organic traffic sources are related to what you’re actually selling.

Is 95% of your website traffic coming from that cute motivational fluff piece at the top of the SERP?

Many companies have the equivalent of a big billboard online: an item that tops the organic SERP, driving lots of organic traffic but few actual conversions.

“We just saw this happen with a client where they had this really low intent, random, low hanging fruit. They wrote the piece like four years ago. And it contributed a ton of traffic over the last few years, and this year it started to decline,” Allie said.

That decline set off red flags within the company, and the client wanted to know if they should spend the time and effort to immediately update the piece.

Our team’s answer was no: even though organic traffic had dropped significantly, it was not a piece that was valuable to the core business.

“I think that’s the inherent danger with chasing organic traffic, is it in and of itself could be a vanity metric. It doesn’t always lead to new business,” Allie said.

Should you update it eventually? Why not! Someday it might prove useful to somebody. But in the meantime, it’s not a priority if you have bigger content fish to fry in the existing pipeline.

Direct traffic is the highest intent

While organic traffic is buildable and predictable, the most valuable traffic is direct traffic.

Direct traffic consists of those visitors who are typing in your actual domain and going straight to your site. When that is happening, you know you’ve gained true traction.

Direct traffic can include email traffic, as it’s traffic that is owned by your brand.

“I think your goal as a content marketer, whichever other channels you use to build up your audience, your goal should actually be to build the direct. Because that implicitly says that more and more people are interested in going to you for your expertise and your knowledge,” Alex said.

“If you’re not accumulating an email list, if you’re not having more and more people type beomniscient.com into the search bar, I just think your efforts are probably not hitting. You’re not getting traction with the audience that you should.”

If you have a big budget, by all means pursue things like organic “billboard” content so that your company name sticks in customers’ minds. But if you’re smaller, stick to content that’s relevant, related to your product, and culminates in growing an audience that you own.

When writing content, it’s easy to get tunnel vision and fixate on keyword search volume. But that data can be misleading and competitive.

“Prioritizing by search volume has a lot of inherent problems,” Alex said. “I just went after a keyword on my own blog, it’s like ‘landing page optimization tools.’ Ahrefs says that it gets like 1500 searches a month. I ranked number one for it, [got a] feature snippet and everything. I get like 15 hits a month. So it can be wrong data.”

Right or wrong, everyone else is looking at that keyword data, too.

That means that competition is fierce, particularly for high-level TOFU terms.

“Prioritizing purely by content volume, you’re going to get into this swamp of competition. And it may also not contribute to the bottom line,” Alex said.

The solution is to set clear strategy KPIs and guardrails, so that you’re not derailed in the quest for vanity metrics.

Think about keywords this way: the whole purpose of keywords is to speak to what matters to your audience.

When you’re charting new territory as a brand, that might mean that you’re working with new and innovative topics that don’t have an existing place in the keyword universe.

In this instance, you don’t have to be a keyword trend follower. You can be a trend-setter instead.

“If you’re playing in a new space, if you have all these really new ideas, I find people limit themselves based on keyword research.”

When working in a new space, the goal isn’t to meet existing demand, it’s to create new demand. That’s when things like keyword volume get even less important.

True, it might take months or years for your new niche to get established. But if and when it does, you’ll already be ranking in the SERP.

Brands of all sizes can get creative with keyword differentiation.

Instead of going after popular or broad keywords, it’s much smarter to target specific keywords that relate to your audience’s pain points.

“There’s an inherent unfairness in the content world in that the bigger your domain rating is, the more weighty your website is, the crappier your content can be and get away with it and you can still rank,” Alex said.

There’s only so many of those huge power-players out there, which leaves the vast majority of companies struggling to compete for the SERP space left.

“You simply shouldn’t go after those unless you’ve got some five-year time horizon, and like this crazy strategic edge that you can exploit to get to those keywords. But even then ask yourself, if 100,000 people are searching for this, how many are actually going to go in and buy based on a keyword that’s ‘what is content marketing’ or something like that?” Alex said.

An alternate term may only get a handful of searches, but it may be vastly more applicable to your audience and their pain points.

Like a good investment portfolio, traffic diversification is the key.

That’s because over time, the value of paid customer acquisition decreases, while the value of organic traffic goes up exponentially.

“I think over the course of the company’s growth, you will want some sort of organic or non-paid channel. Paid tends to have diminishing marginal utility over time, because the things you’re bidding on get more competitive, more competitors outbid you. The cost to acquire customers becomes more and more expensive,” Alex said.

The opposite is true of organic. It becomes easier and easier. Your marginal cost to acquire customers becomes less. Often, the two synergize in helpful ways.

“If you’re ranking in search, that’s actually going to help you with your Google ads. So I think building out and also diversifying your channels so you’re not fully reliant on one ad platform,” he said.

As always, content marketing isn’t an exact science. Sometimes you get surprising results. But the methods you choose to pursue should be uniquely suited to your company stage, industry, and goals. 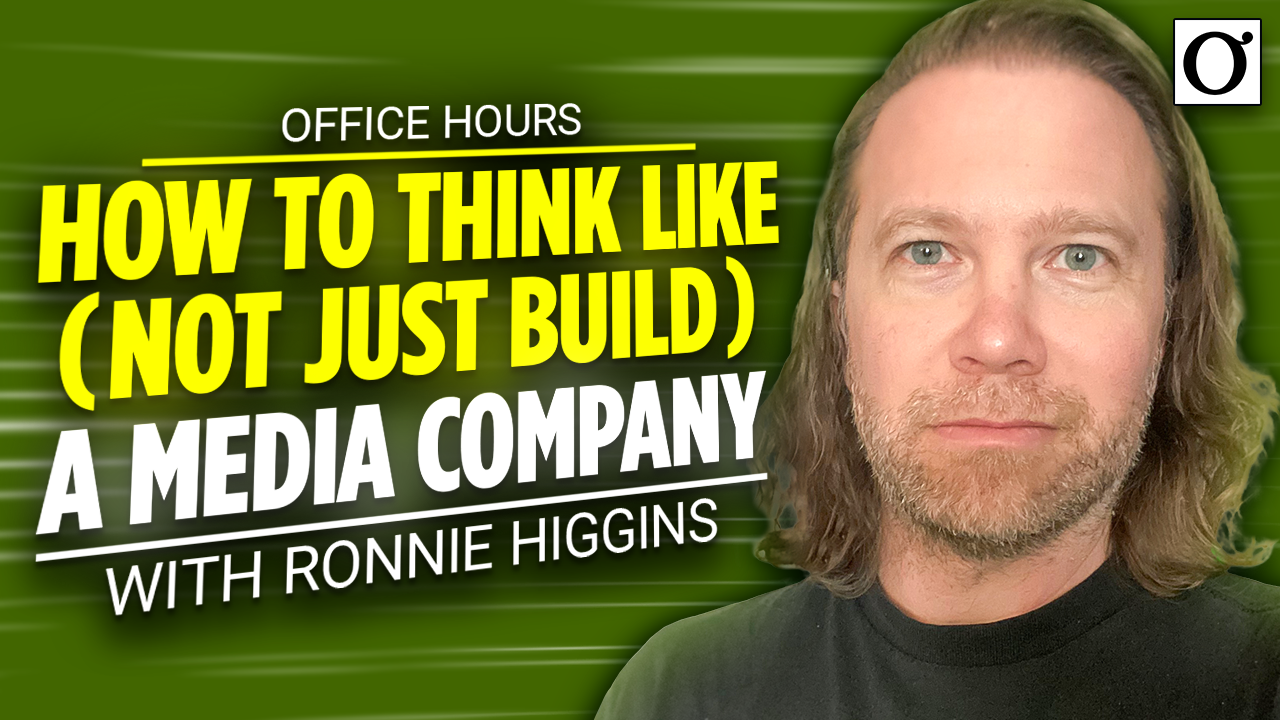