Content is a long game. But if you want to win, play fast.

By Alex BirkettMay 9, 2022No Comments 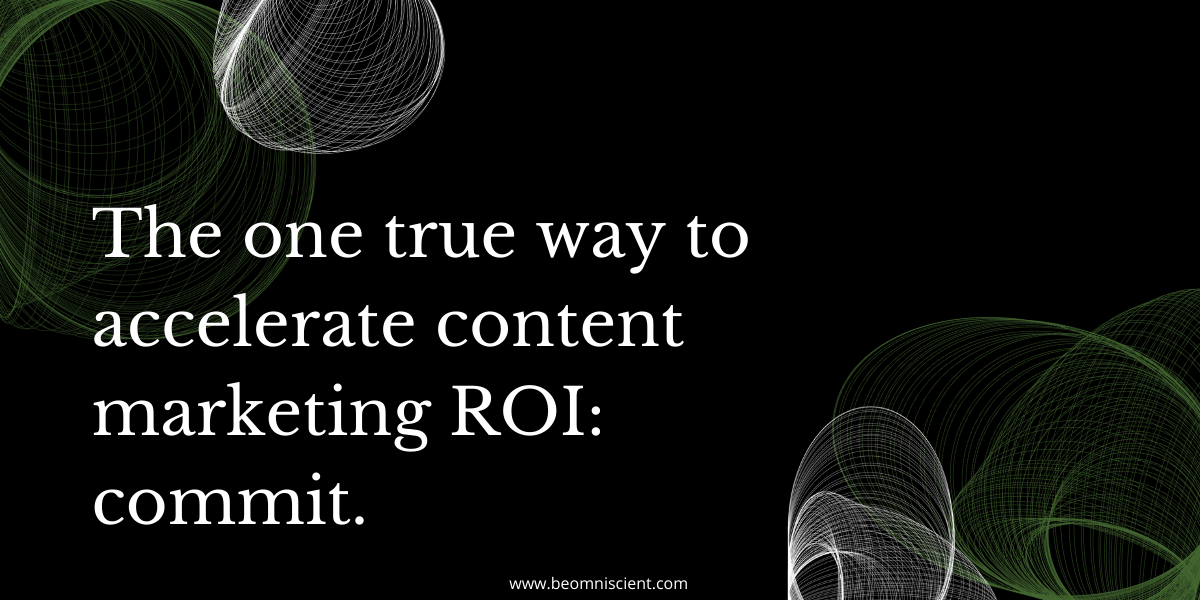 Our most successful clients have one thing in common: they commit.

They understand the value of content and are confident that it will work for their business, so they don’t want to wait or dip their toes in the water. They want help with their strategy and execution, but they have no doubts about the viability of the channel.

Many, however, want to test things out first. Dip their toes in the water slowly before diving into the deep end.

This is a logical approach to most things. Probably not with content.

You can test messaging, tactics, and even strategies within content marketing. But you can’t “test” the channel – you’re either in or out. And if you’re in, your competitive advantage might just  be going all the way in.

Results compound, but you don’t have to wait to see ROI

You might have even heard me say that phrase. After all, we named our podcast “The Long Game” after this ethos.

However, just because content is a long game doesn’t mean you need to wait a long time for results.

If you’re early stage, spin the flywheel early and fast

SEO, as a channel, compounds like a flywheel. The more you write, the more links you get, the more easily you rank, the more money you can put back into writing…and on and on.

At the start, it resembles the tip of an iceberg. But as your website gains authority, the flywheel spins faster, and seemingly overnight, your results come pouring in.

Okay, so we all understand the concept of a flywheel.

But that doesn’t help the early stage startups who are just beginning to spin their flywheel. In fact, there’s an inherent disadvantage to being a smaller player in content marketing. You have to spend *more* money to achieve the same results as the big guys.

As your domain authority increases, you can typically produce content of lesser quality and still see it rank

The faster you can get to scale, the faster your ROI will become positive and you’ll be able to reinvest it for further growth or channel expansion.

Everybody’s free to focus on distribution

Beyond the SEO flywheel, you can get a ton of value from content without ever ranking in search.

In a longer sentence: you can repurpose your content to multiple channels, promote it where your audience hangs out, and use it in creative ways like sales enablement and ad creative. All of this brings your ROI window to 7-28 days, instead of the typical 3-6 months that it takes to see SEO results take hold.

A smart marketer is looking for leverage and arbitrage. If you can’t compete right away on search, you can probably find a channel or method that lets you compete.

For example, DataBox grew their blog from nothing to tons of traffic by basically running a HARO program for their content.

Because they didn’t start out with a high DR (no one does), they included 30-50 expert quotes in every post. This way, everyone included in the post shares the link on Twitter or LinkedIn, and automatically provides the post with distribution.

Peep Laja has a large following on Twitter and LinkedIn, so before relying on SEO traffic to grow the Wynter blog, he leveraged his personal social handles to promote the ideas, messaging, and value proposition of Wynter.

Now, they’re at a place where they can probably start to compete with larger competitors in the search landscape. But they didn’t just accept zero ROI until that point; they got results in other ways, on other channels where the *could* compete.

So even if you’re just starting out on your content journey, realize this: if you create insanely high quality content and promote it like crazy, you can still get wins early on. Those wins start to compound and grant you the privilege of ranking for more and more keywords, and eventually, you’re one of the big players in your space.

But it takes investment.

Half-ass it, and you’ll likely get less than half the results. Content, unlike other channels, often has increasing marginal utility – up to a point anyway.

The faster you build, the harder it is for competitors to catch up

If you and I line up at the starting line for a race, just because I blow out of the starting gate at a sprint doesn’t mean I’ll end up winning. Rather, I’ll likely exhaust myself early and you’ll overtake me.

In contrast, if you and I start investing in index funds on the exact same day, the faster I invest the better off I am.

This would be my amount after 5 years of active investing.

Then I just ride it out with zero investment for 5 more years.

Meanwhile, you invest $100 every month.

I end up at $25766 and you end up at $23829. One can only imagine how these two investments will compound over the decades that follow, especially the first.

To be clear, it’s great that we both invested in an avenue with compound interest. But in these scenarios, it helps to ramp up as early as possible.

So if you know you want to build an organic acquisition channel, it’s best to pour as much as you can into it as early as you can.

Not only do you get better results, but organic search is a zero sum game. If I take position one, I steal it from someone else. That’s why it’s such a moat (and the more powerful your website and brand, the stronger your moat is).

So you’re playing offense and defense by going all in, because you crowd out and make it very difficult and expensive for your competitors to usurp you.

One of my favorite books recently was Amp It Up. In it, Frank Slootman describes three management principles for outstanding success:

First off, if you look across the proverbial pond to the world of journalism, you’ll realize the quality of journalism rarely suffers from urgent deadlines. If you raise your own standards and shorten your deadlines, you’ll often surprise yourself with the quality you’re capable of putting out.

Second, to both increase output and quality, you have to narrow the focus. Certainly, you won’t be able to do everything all at once.

In content marketing, I apply this in various ways:

Will it make the boat go faster?

To the first point, many content marketers care about things that don’t matter. I mean, their audience doesn’t care about their 20 page style guide. Or their made up buyer personas. Or their use of active versus passive voice.

This stuff is the luxury that lazy large organizations can spend time on because they have surplus headcount and money to spend.

Instead, before engaging in a task, ask yourself, “will it make the boat go faster?”

For context, this phrase comes from Ben Hunt-Davis, the captain of the British national men’s rowing team. To deal with the failures, Hunt-Davis came up with a rule. When considering any activity or decision, the team first asked, “Will it make the boat go faster?”

Now, the scale and stage of your company determines a lot of this.

Doing so when you’ve got 20 inbound guest post requests per day and are wasting a lot of time filtering and editing? Makes the boat go faster.

Be ruthless with yourself when you ask this question and drop literally everything that doesn’t make the boat go faster.

Land and expand (but make sure you land first)

To the second point, before you expand your topic and keyword strategy too far out, dominate one niche or topic cluster.

There are three benefits of doing this:

After writing dozens of articles on experiment design and A/B testing statistics, my knowledge started to sharpen and I was able to predict and ideate topics almost subconsciously.

Topical authority, while debated as to what exactly that means and how Google identifies it, generally follows the “a rising tide lifts all boats” model. If you’ve written 5 posts about Topic X, writing another 5 posts on Topic X might help the previous ones rank as well.

More importantly, your audience associates you with Topic X. And when people ask on Twitter, “who should I follow for Topic X,” you come up.

Find your strategic edge and exploit it

Finally – and the most important thing to consider in your strategy development – is to identify an edge on which you can compete and exploit it to the full extent.

Got an inspirational founder who can command attention on LinkedIn? Repurpose everything you write to flow through her LinkedIn profile.

Long time Reddit or Hacker News user? Double down and invest in the community, sharing and promoting when applicable and effective.

Take, for example, Adam Enfroy. He started his blog like 3-4 years ago and now he’s making millions per year on affiliate marketing and has more traffic than probably 99% of B2B blogs.

How? He went hard in the paint.

He got a shitload of backlinks (his main focus and edge to exploit, as he had many editorial connections). He massively scaled content production. He wrote high quality stuff that passed Clearscope’s SEO bar.

Testing the waters with a new channel seems prudent, but with content, it’s most likely not.

Content marketing is a channel that has been around for years, and you can quantify and model the ROI of the channel using a standard keyword research tool and your baseline conversion rates.

Essentially, all of your inputs and outputs are fairly predictable, but the path (the strategy) to accomplishing those numbers is where the work is.

And I’m making the case that the more bullish you are on running down that path, the more likely it is that you’ll win in the short term and long term.

Some channels can be tested; those who win at content marketing commit to it.

Ross Simmonds on 6 Life Lessons To Improve Your Content Marketing