Kitchen Side: Our Attempt at Ghostwriting Thought Leadership Content 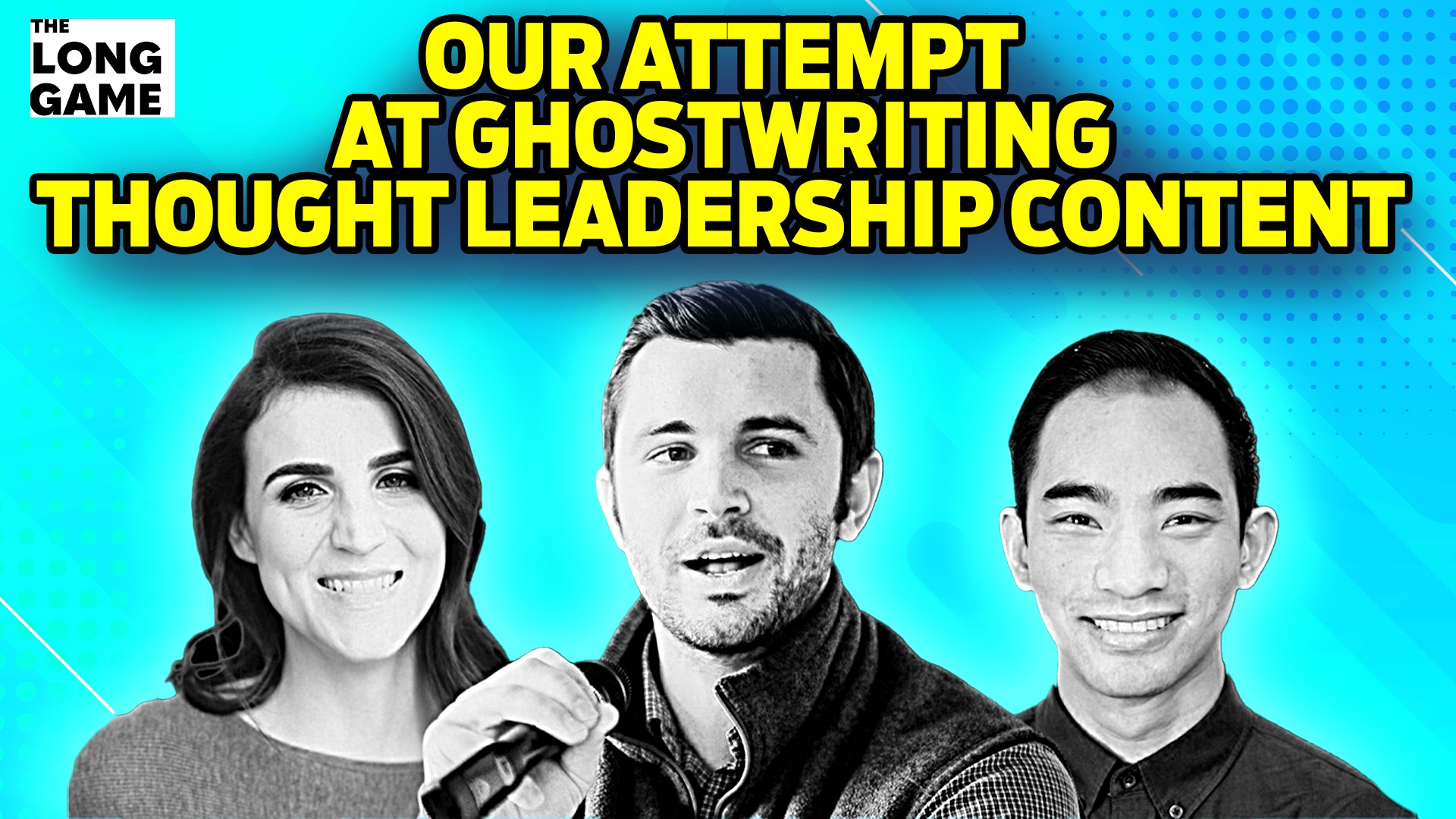 You don’t have to look far to hear that “thought leadership” matters in 2023. But what does it take to do it well and in an authentic way? In this conversation, we chat about the best — and worst — ways to approach building that authority.

What is Kitchen Side?

You understand how things look from the inside and how that differs from the outside.

You understand how the sausage is made.

As an agency ourselves, we’re working both on growing our clients’ businesses as well as our own. This podcast is one project, but we also blog, make videos, do sales, and have quite a robust portfolio of automations and hacks to run our business.

We want to take you behind the curtain, to the kitchen side of our business, to witness our brainstorms, discussions, and internal dialogues behind the public works that we ship.

Allie established a balance between editorial content and optimization, which allowed her to write more freely while still meeting goals.

“I definitely, I probably swayed toward SEO strongly at first, which was over optimizing. It became a little bit too formulaic for me in the way my brain works. And since then, I feel I’ve established a balance where it’s as much editorial as it is, optimization. But there definitely was a time where I was I literally can’t sit down and write something that I care about, I can. But if it’s going to serve this broader, distribution purpose and these conversion goals, there needs to be other things injected in the writing process and that was probably one of the biggest and toughest lessons I learned early on at HubSpot. Because it wasn’t how I started my writing career, but it was a valuable lesson.”

Writing for yourself is not the same as writing for others

There are different ways to approach things after starting a thought leadership project.

“It wasn’t until I started doing that thought leadership project that I realized there were different ways to approach things personally. I have since struggled writing for myself. I tend to start writing through what? Through talking. I’ll record and transcribe some of the things cuz I don’t even have a chance to look at what is the cert, what are the cert saying? Or what do people care about? Cuz I’m still much, it’s ingrained in me, but it took me a while at HubSpot. It wasn’t until I started dabbling in completely different content types and different purposes that I understood, there’s, this is literally one.Thousands of ways to approach a piece of content.”

Unlearning writing only for SEO

David used to be very tactical with their writing, but now he’s trying to unlearn those habits so that he can have a more unique voice.

“I’m writing my personal monthly newsletters cuz it’s email, there’s no point in doing keyword research. It’s literally what am I thinking? And that has broken me out of it. Cuz the keyword driven and marketing to be discovered then took away my sense of creativity and maybe instilled more fear of this is how it should be done. And. Even, maybe a couple years ago it was trendy to write those blog posts. I was super tactical with the screenshots and captions and image and I used to write a lot of stuff that for my blog and other companies when I was freelancing and a part of me still feels everything I write needs to be action while I have those sort of images. But a lot of my thoughts naturally high level strategic and I’ve gotten more not having to get as tactical all the time. In a sense, I’m trying to unlearn, although what I consider now bad habits from SEO and content marketing to have that more unique voice in my actual personality, not this SEO filtered personality”

It is important to have good content that is relevant to what the searcher is looking for.

“When it comes to optimizing a piece of content, it doesn’t take much. It has to be good, which is relative, but I know we all know what not good content is. It has to be a validated keyword idea, which that’s I know we’ve discussed the SEO thing. Which thing, the first part of it has to be you can do your research as it applies to SEO with Ahre and all that stuff. But then the back end of optimization, not to dumb it down, but. There’s keywords in play, there’s structure in play, a lot of things with the meta tags and stuff that. But in outside of having good, interesting content that’s relevant to what’s ranking, it doesn’t have to mirror what’s ranking it can still be a different take of what the searcher is looking for. And that’s where SEO content has plateaued as it’s become. All, literally all the same, but what’s in the middle of that sandwich? The bulk, the meat of your post can be whatever you want it to be. Outside sources, as long as it’s relevant and good. But that’s where people don’t that vagueness and those gray, those gray zones. They’re Let’s do what everyone else does because at least we’ll get up there.”

If you look at a group of content and they are all saying the same thing, it is probably all bad content.

“I have two different ways of looking at bad content. When you look at an individual piece, it’s not helpful. It’s not entertaining. It doesn’t catch any nuance. It’s clearly a general piece written by someone who doesn’t know. There’s, if you look at a group of content, if they’re all saying the same thing, it’s probably all bad content. Cuz I’ve been doing research on my own stuff recently and I’ll click on one article and I’ll be cool. There’s. It’s pretty helpful. I move on to the next one. It’s literally the same headlines, same age, two titles. And I’ll go down to the first search results of Google and I’m Wait a minute. These all literally the same headlines. I’m clearly someone’s copying someone. I’m not gonna read the rest. Know what they’re all gonna say.”

HubSpot’s article about AB testing may be wrong, which could train Google’s algorithm to expect certain things from searchers.

“Here’s something I wonder with that, and this may go beyond content marketing to the ethics of publication, but let’s say it’s a chicken and egg problem with the ser analysis. Let’s say HubSpot writes an article about What is AB testing? Then they’ve got a high domain rating, they’re probably gonna rank for that piece. Even if they can move, they can move outside of the common ranking signals because they’ve got such a strong website, or let’s say it’s a new keyword and they establish that talk or what the topics are about on that, then other people start to mimic that and it becomes this feedback loop where every page now starts to write about the same things. But imagine that HubSpot’s first article about AB testing is totally fucking wrong. Now you’ve got this expectation built in where the. Of the searchers has been trained by Google’s algorithm. Then you have to conform to that. Is, I don’t know if that’s a question or not, but that it seems to be something that happens with search terms.”

The goal of content is to build an audience that cares about what you have to say.

“I wanna revisit the conversation of what the goal of content is. At the end of the day, it’s to build an audience and that’s the content thing else you wanna do with your business or your personal brand or whatever. Whether it’s through creating a blog or an email newsletter, a TikTok profile, you wanna. A group of people who care about what you have to say. And from there, you can do whatever you want. Your domain, high domain rating is part of that. If your goal is organic or maybe it’s number of followers, but whatever you decide to measure it by, it’s about building a group of people that care about what you have to say. And sometimes in our world, B2B software, it’s. Usually through Google, cuz that’s where businesses tend to go search for answers to their questions.”

It can take years to see results from content marketing, so it might not be the best channel for those who want immediate results.

“I would think about it in the scope of years. If you’re starting out And if you’re not comfortable waiting two years to sew the seeds of that garden, then it’s probably not the channel for you and you probably should raise another round or you should go for paid acquisition that. I completely agree with that. Or if you’re boots strapped, right? Then you’ve got all the time. As long as youe ROI positive, as long as you’re cash flow positive, then maybe you can make it work. But I do find that many of our misconception type clients that come in and they’re bad fit are because, Basically expect something next month. The pillar and cluster model has done more harm than good. Because people misunderstand what clusters are, and they imagine a pillar page is a landing page for some reason. Or sometimes they imagine a pillar page has to be 10,000 words, which isn’t what the idea ever was. It was more about clustering common topics to, to build semantic authority for Google. And that misunderstanding has produced more harm to content programs who feel they have to cluster everything and create some landing page for some head keyword as opposed to writing about what their audience cares.”

The value of having something in your hands that you can hold onto and flip through it’s just more tangible, more real, and more valuable than anything else you can find on the internet.

“People need to do more written, published content, actual in real life content, magazines and catalogs. Online content has become extra. and there’s nothing that feels better than having an actual thing you’re holding and going through and feeling additional value. It also feels more credible for whatever reason. It could be the same damn content that’s published on a website, but the fact that it’s some, they went through the process of publishing it, it feels more credible”

How Marketers Waste Time and Resources, and the Audacity of Big Goals with Jakub Rudnik

Jay Acunzo on Creativity, Storytelling, and Why You Need Courage to Break Out of Mediocrity