By Alex BirkettOctober 29, 2021No Comments 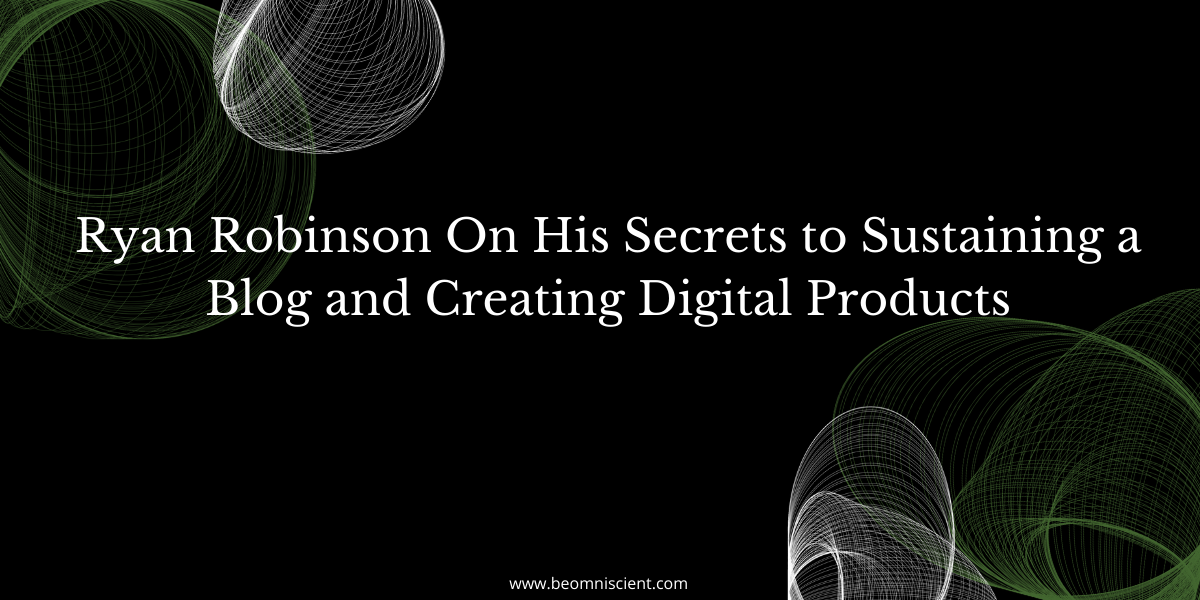 Blogging about blogging is pretty meta, but it’s how Ryan Robinson has built and sustained a successful blog for almost 10 years.

He’s gone from documenting what was and wasn’t working in his day job to writing about freelancing and building digital products for other writers like templates and courses.

What was once his side gig has turned into a full-time career.

He talked to us about his work process, how he creates and promotes content, and how sometimes you have to turn down high paying work to reach your goals.

Even as his attention has shifted to building more digital products, Ryan still works on growing his blog traffic.

“It’s essentially, always, I think for me, going to be a combination of publishing new content and updating existing and promoting just everything site-wide,” Ryan said.

The top 5 to 10% of articles are the ones that get the most promotional effort because they’ve proven they can perform well.

He’s streamlined the topics he covers for now to blogging, writing, podcasting, driving traffic, and monetizing a website so that he can dive deep on those things.

Things are always changing, so there’s no perfect balance between these tasks.

“Finding that balance, it’s never in perfect harmony of I’m killing it on all fronts,” he said.

“I think it’s a matter of course correction too. Being the creator, doing some outreach or managing the inbound partnership opportunities that come my way too, and doing things like advising, guest post writing.”

Ryan tries to stick to the rule of spending 80% of your time on promotion and 20% on creation.

That’s much easier if you stick to channels you enjoy posting on.

“The vast majority of the time for me that means guest blogging,” Ryan said. “There are other things that fit into the wheelhouse. Answering questions on Quora. That’s been a really fun one.”

For Quora and other platforms, you have to make sure you’re overcoming a value threshold in your post if you’re going to link back to your own blog. Make sure you’re adding something thoughtful to the conversation.

He also spends time promoting on social media, but he focuses his energy and time on one channel:  Twitter.

“I think my intention with social media these days is to just be present on just one channel where I know my audience spends time, rather than trying to mechanically send out 10 pins a week and five scheduled tweets and a clickbait-ass LinkedIn status update,” he said.

If you have the bandwidth to target several social media platforms, go for it, but focusing on just one or two you like can be very effective.

Use reader questions to inspire posts

When it comes time to generate new post ideas, Ryan thinks his best posts come from reader questions that inspire him.

“My most favorite at least is when I get a reader question that inspires something and that’s when the article really comes from within,” Ryan said.

He will often very quickly write an outline for the idea as a reply to the email he received and tease the fact that he’ll write an article on it soon.

Those are the articles he likes to write himself instead of giving it to a freelancer.

“Those are the ones that I often write myself and I don’t want to give to another writer because I’m like, ooh, this is gonna be so fun,” he said. “This is going to be really authentically me.”

He also creates more strategic and keyword-focused posts to fill out the blog.

“Taking a look at the landscape of what competitors are writing about sometimes too is fair game,” he said. “But I spend a lot of time in Ahrefs just looking at different keyword ideas that either come to me or I find from content I see out there on competitor websites.”

Ryan very recently went from 150,000 to 105,000 email subscribers by removing a large chunk from his list. It was a hard decision, but one he ultimately knew was right.

“I realized that I felt some friction towards doing that,” Ryan said.

“And once I spent enough time thinking about it, journaling on it, I just came to this crystal clear place of, that’s my ego that wants to retain these people that haven’t opened an email in nine or 12 months.”

Those subscribers weren’t really there anymore, but there was an appeal to keeping that higher number.

“The reality is that 99% of those people will never open an email again because they’ve moved on,” he said. “They’ve gotten what they needed, decided it’s not for them, whatever.”

His list is now much more focused on the readers that are engaged.

Making business decisions without involving his ego or romanticizing things is something Ryan is working on.

“It’s been I’d say four to five years of very consciously list building,” Ryan said. “And that includes things like pursuing exact keyword phrases that I know would be paired perfectly with a free course or a free template or some sort of downloadable.”

One example is that he wrote an article about how to create a blog business plan and he realized it was a perfect idea for a template.

He’s kept focused on those opportunities while also improving his search rankings so those free offerings are shown to more people.

“That’s just become something that, as I do all these things, we’ve been talking about guest posting, strategic partnerships, ways to get more high quality links to my content,” he said.

“I rise up in the search rankings and people click on the article, people that want the template grab it.”

Many of those people then subscribed to his email list, and he’s been able to monetize more and more in the last two years with digital products.

Let go of perfectionism when building a course

Ryan has learned that your first time creating a course can be a way to validate that there’s an audience before you create an even better one.

Don’t let perfectionism hold you back.

“Unrolling the perfectionism a bit here,” Ryan said. “I think you can do courses that are designed around validating what your more perfect course could look like in the future.”

That initial course may still take you a month just using Loom videos and a iPhone on a tripod, but you have to do the best with what you have. It’s more about the value contained in the course.

“I think there’s something to be said for just shipping a basic course that ideally if you’ve done your homework and you’ve validated that people on your email list or people who come to your blog have this real problem that you’re working to help them solve for the course,” he said.

Ryan has solved some of these issues for himself by hiring an agency to develop scripts for him and take on some of the responsibilities.

“I feel much more confident in the support I have to get something like a script a day from my team and know what to talk about for doing a couple of videos,” he said.

“And being able to just knock out a course in a few weeks versus something that I would sometimes agonize over for months.”

Turn down work that no longer fits

We all want to get those big paychecks, but sometimes there is a downside to taking on big projects if it’s something that no longer fits with what you want to be doing.

Ryan recently turned down a big project that would have taken time away from his new goals.

“I allowed myself to sit with that for 24 hours, think about how I want to allocate my time and my energy,” Ryan said. “And I realized my heart wouldn’t be in that at all.”

He could pass the work on to the writers on his team, but at the amount the client was offering, they would expect him to be involved.

“I think even just having something like that on my mind would be an opportunity cost distraction away from all these other things I want to do,” he said. “Like growing the affiliate revenue, growing traffic and building more digital products.”

Work is about both time and money and if a big paying project takes you away from the work that matters more to you, that has to be part of the decision, too.

035: How to Create a Revenue-Generating Blog with Ryan Robinson

The Modern Approach to Content isn’t a Library or a Publication: It’s a Portfolio