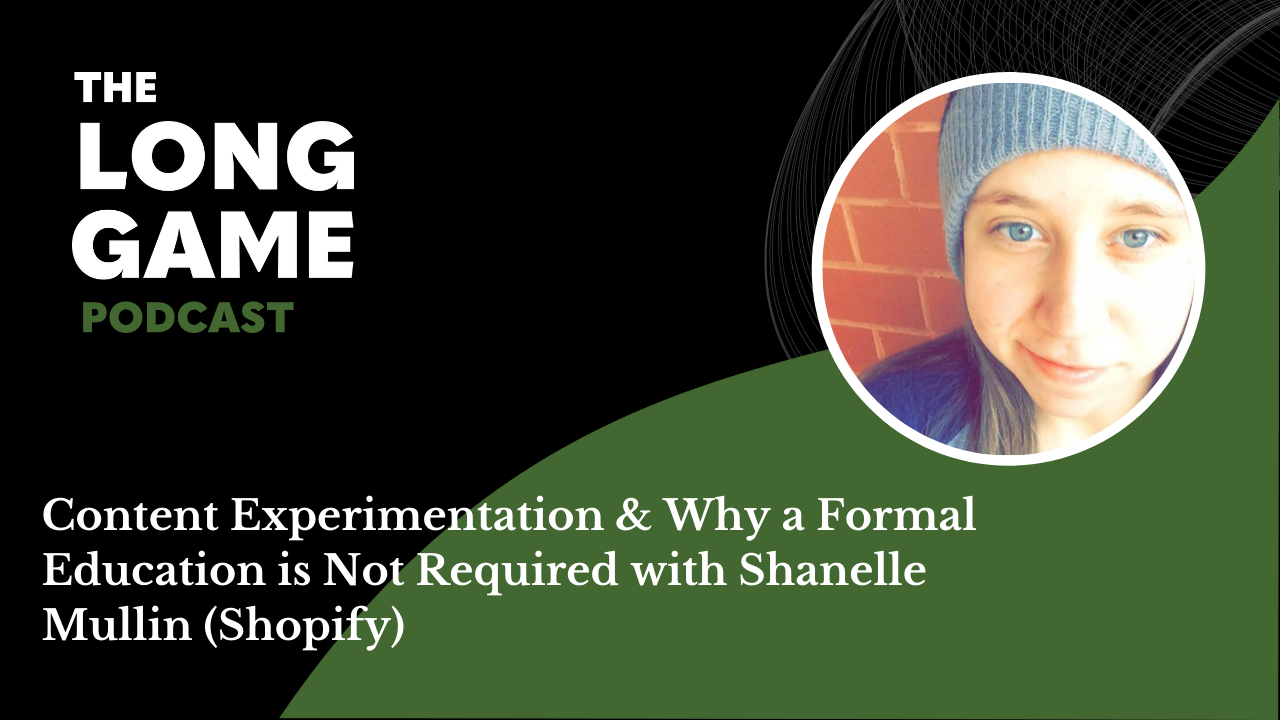 Sometimes your career milestones are clear as crystal, and sometimes they only become clear in retrospect.

Shanelle Mullin has had an exciting path, from writer at CXL to Experimentation & Analysis Lead at Shopify.

At each juncture, she’s followed intriguing people and her own innate curiosity. Alex and Shanelle worked together in the trenches as writers at CXL.

They reunited on the podcast to chat about the worlds of content and experimentation, and how creativity and professional work can diverge and collide in interesting ways.

Shanelle has found that she thrives professionally when she’s in a supportive environment with high expectations.

“A big part of my success in my career has been getting to largely choose the people that I work for. And I very deliberately look for people who have those high standards, but then also to your point, like kind of that softness. I think I prefer working with people who lead with kindness, but also have high standards. I think that a lot of the time, people think it’s in opposition to one another. But I think that you can be a very kind, caring person who advocates for the people who work for them, and then also hold their craft quality to a high standard.”

As Shopify has evolved, Shanelle’s team has turned into a center of excellence. This means lots of education so that teams can strategize and succeed.

“Earlier this year when we were starting to decentralize, it was a lot more just straight up education. We built a live workshop and we air quotes “tricked” everyone into coming to said workshop, so that we could quickly get everyone on growth up to speed on the basics of experimentation. And now I would say it’s more moving into an embedding model, where we’ll work really closely with some of the growth teams and we are more hands-on with them. And we show them the process. We talk to them about the strategy behind the process. We talked to them about the science and the math behind the processes, so that they can eventually go off on their own. So it’s an interesting balance of strictly supporting growth marketing teams, and then also we have a lot of foundational things that we work on separate of the growth teams.”

Shanelle never went to school for what she does, which means she’s accustomed to learning on the fly. It also means she recognizes when and how to explain things in layman’s terms.

“I picked up what I needed to from courses and books, and data scientists at Shopify adopting me and teaching me after work how to do certain things. And so I think I had to learn things in a very simplistic way. I don’t think I learned them in the formal theoretical way. I learned them very applicably. And so I think that maybe made it a little bit easier for me to explain it. I feel like when I’m writing an article, I always try to think of how I wish someone had explained it to me. And I think also a thing that I know is inaccessible to me as someone who doesn’t have a formal background in math or data is a lot of the terminology trips me up when I’m reading a textbook or something. I’m like, I don’t know what this concept is, because I didn’t take this class in undergrad or something like that. And I think I know what to look for sometimes and what might trip people up.”

At Shopify, the experimentation focus is on gaining true insights, not just chasing quick wins.

“Regardless of who the leadership team has been, it’s always seemed like there’s been buy-in for the insights that come out of experimentation. Which is great, because I think that the alternative is that people are very focused on the wins, and we all know that most tests lose. And most tests aren’t designed in a way that you will learn something regardless of the outcome, which I think is also a common mistake. But it’s been really delightful getting to work in a company where people care about what we’re learning, and we’re looking to build a body of insights and a body of knowledge, not just looking at the velocity and the win rate and going from each individual experiment.”

Sometimes you’re aware that momentous change is within reach. That’s how Shanelle felt when she interviewed for a position at CXL.

“When I reached out about working at CXL, I did suspect that it could be a big opportunity. Like I wanted specifically to work with Peep, I specifically wanted to work with CXL. But I’m not sure that I’ve ever come across another opportunity that I’ve been like as sure of from the very beginning of, this will be something big. But weirdly, when I was in it and we were like sending each other blog posts at 8:00 AM because we had just finished and we needed someone to edit it and it was going live in an hour, it didn’t feel like something monumental was happening to me. But looking back five years later, it definitely was a huge, impactful part of my life.”

Journaling and hobbies have proved important for Shanelle to reflect and avoid burnout. She believes it’s important to have certain hobbies that are purely for fun.

“I journal pretty regularly, which is a new thing that I’ve been doing. And I’ve been using it for self-reflection, because I did realize that so much of my realizations come in reflection. I’m like aha, maybe I should reflect more than once every six months. So I’ve been doing that in an attempt to realize those moments as they’re happening, or at least not so far after or not so long after they’ve happened. And I also write poetry that I don’t publish anywhere. I’m trying very hard to maintain hobbies that are not monetized, which is very difficult for me because I just can’t stop thinking like, ‘I could be making money. People do this and they get money for it. Why would I not be doing that?’ But then all of my hobbies start to look like my work, and then I get burnt out.”

Writing is a process of synthesis and exploration. Shanelle’s goal when writing is to bring everything she researches and reads together into a new, cohesive whole.

“I often felt like I was learning something, and then the next week I would write an article on it. And I think a couple of times since working at CXL people have come to me and said, ‘It’s so great that you had all of this knowledge that you’re sharing with us!’ I was like no, I just got that. And then I wrote about it in the way that I wished was accessible to me, instead of going to all of these different places and all of these different sources, and doing the reflection on what I’m learning and putting it in a good format or an accessible format. That’s what I tried to do. And I think the only tripwire I had was I told you and Peep what kind of topics I was thinking of. And I think maybe he vetoed a couple. But other than that, it was just what I was learning and what I was interested in.”

When she joined Shopify, the focus wasn’t put immediately on work. Instead, there was time to learn, connect, and breathe.

“What initially drew me to Shopify was that wide open space. It’s a bigger company now than when I started, but when I started, it was the biggest company I had ever worked for. And I was excited that they didn’t prescribe what you should be doing. Like I remember my first two weeks of working there, I kept going to my lead being like, what am I supposed to be doing? And he was like, just meet people, and figure out what you’re interested in. And you can do that. I’m like, but what do you mean? What article is due? And he’s like, no articles are due. So I think a lot of that energy, despite all of the growth at Shopify, is still alive. And I think that’s very exciting. I think that the short-term goals and being in more leadership positions are challenging me in an interesting way, but I also love that space is still available at such a large company.”

At first, Shanelle was resistant to taking on a leadership role. Now, she feels like she’s hit her stride and found the perfect professional challenge.

“On the leadership side, I was resistant for a while to being a people lead. I didn’t know if I wanted to do it. I had tried it at previous companies. I was air quotes ‘director of marketing.’ It was a very small company, a very inflated title. But I did manage a few people and I didn’t enjoy it. And so I was very nervous about doing it at Shopify, and Cassandra really encouraged me to try it. And I ended up loving it. And it feels like a completely different set of challenges, and it feels like a shift from where I’ve spent the vast majority of my career in a way that I maybe wasn’t really expecting. I didn’t think it was going to change that much, but I’m excited about it. And I think that you’re right. It probably is the closest I felt to feeling like this is one of those moments of great change.”

Moving ahead, Shanelle has set her sights on continuing education. In the future, she hopes to start a business and try her hand at writing a book.

“I love what I’m doing at Shopify. I would like to continue improving at the things that I’m doing there, and learning there and continue refining my craft, which I think is a big part of it. Like I really love education, despite not really pursuing it in a formal way. And so I think I realized that I want to make a lot of space for continuing to learn and grow. So I take a lot of courses still. I’m in the middle of a front end development course. So I’m trying to learn how to code and also taking like stats courses, I read a lot of textbooks. Those are the things that make me really happy. And then I do eventually want to start a business. I don’t know what kind of business, but I still think that it’s like a similar model to what you have, of like a side gig. Or not a side gig, but on top of a day job, more or less. And I would also like to write a book.”