By Alex BirkettJanuary 10, 2022No Comments 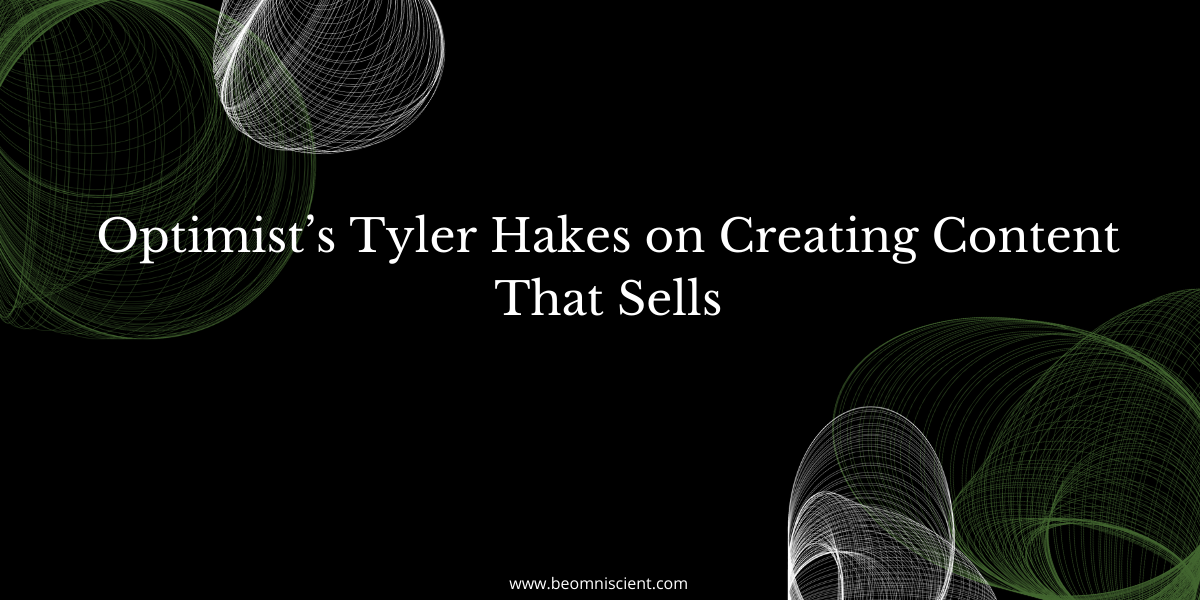 Marketing agencies are a dime a dozen. But Tyler Hakes wanted to build Optimist differently.

Tyler found himself often frustrated that companies and agencies often play a game of telephone, never actually speaking with the people who were creating content on their behalf.

That’s why Optimist functions as a collective of high-level freelancers of varying specialties, who come together to take content strategy for Optimist’s clients from end-to-end.

Here, Tyler shares the lessons he’s learned over the past 5 years of running Optimist, and why he always thinks of content in terms of ROI-driving assets.

Tyler started out as a freelance writer, but decided to found an agency when he realized that companies really needed a strategy to pair with their content.

He constantly found his scope of work morphing from creating content to helping advise companies on bigger picture strategy.

It almost felt like doing a public service, as he couldn’t stand to see companies wasting money on content that was going nowhere.

“I would come in to work with an organization, and I was working either directly with the CEO or with a marketing leader or something like that. And it was very apparent that they didn’t really have any kind of strategy or anything else in place,” Tyler said.

“They were sort of like wasting money, lighting money on fire. Hiring me to write content, but they had no strategy in place. They had no promotion built into it. There was no SEO component.”

When he found himself continuously becoming a defacto content marketing consultant versus a writer over and over, he decided to start an agency of his own.

His goal: to create an all-star team that could transform content from an expense into an investment.

Tyler’s realization was simple. Incredible content is meaningless without a solid strategy to back it up.

After all, if you develop the perfect piece of content but execute the wrong strategy, it all goes to waste.

Tyler built Optimist as an “anti-agency” featuring a collective of talented freelancers of varying specialties.

First, it means that when building the team, there wasn’t the same math of needing to hire X person at X salary per month.

It means sourcing and curating a small pool of smart writers, strategists, designers and then leveraging them for any client work that came their way. Monthly, pay is paid out to everyone from the profits in accordance with the amount of work put in.

Tyler didn’t even need to create formal job posts. Thanks to social media, he put out a call for like-minded folks interested in a collective agency model.

The second goal accomplished was that Tyler could keep his team close to the client, with no bureaucratic and administrative barriers.

“There were a lot of things that I hated about agencies. One of the big ones is that the people who talked to the clients were not the people who did the work. And there was always sort of like these layers of communication where I felt like things got lost in translation,” Tyler said.

“A big part of the impetus behind Optimist and the reason why we built it in this way is to say, how do we get the people who are doing the work as close as possible to the actual clients, and the work that they’re doing, and the strategy?”

Now instead of handing off isolated briefs to writers, there is a shared understanding of each project and its goals from the start.

The old-school way of thinking about content is as a publication.

While this shift of old-world and new-world outlooks on content is still up for debate, Tyler feels that companies should not feel pressured to publish content on a regular schedule.

Instead, a novel way to think about content creation is about generating assets.

“We’re grooming this collection of assets. We’re investing money in this. It makes way more sense to invest a marginal amount in refreshing or updating or expanding an existing piece of content to see 10x results than to throw another mark on the board by making a new piece,” Tyler said.

In most cases, Tyler believes that companies will see a much better ROI by maintaining content versus generating net new content.

Don’t be scared to sell

Another divide in thinking within the content world is the group that sees content as educational and/or art, and those that see it as a revenue-generating function.

Tyler is firmly in the camp that believes that content should have a direct impact on ROI.

“I think there’s a lot of content purist people who are scared to sell, but I think content marketing should sell. I don’t think there should be any concessions about that,” Tyler said.

Content for the sake of building brand awareness doesn’t cut it, he believes.

Instead, he thinks that almost every piece of content, with a few exceptions, should be built to sell a product or service in a very specific way.

“I think here’s still probably 50% of people who operate in the kind of space who view content as art rather than a business. And I definitely lean into the business side,” he said.

When it comes to justifying Optimist’s monthly client retainers, it only makes sense that they prove the money paid is well spent.

It’s a forcing function, but one that has helped Tyler and his team double-down on shifting perspective and looking at the business value of content.

No matter what content camp you fall in—publication or asset, art or ROI—this is an area where everyone should be taking notes.

047: SEO as a Distribution Channel, and more with Mischa Vaughn (Webflow)

Sam Chapman On How to Bring Your Content Marketing A-game