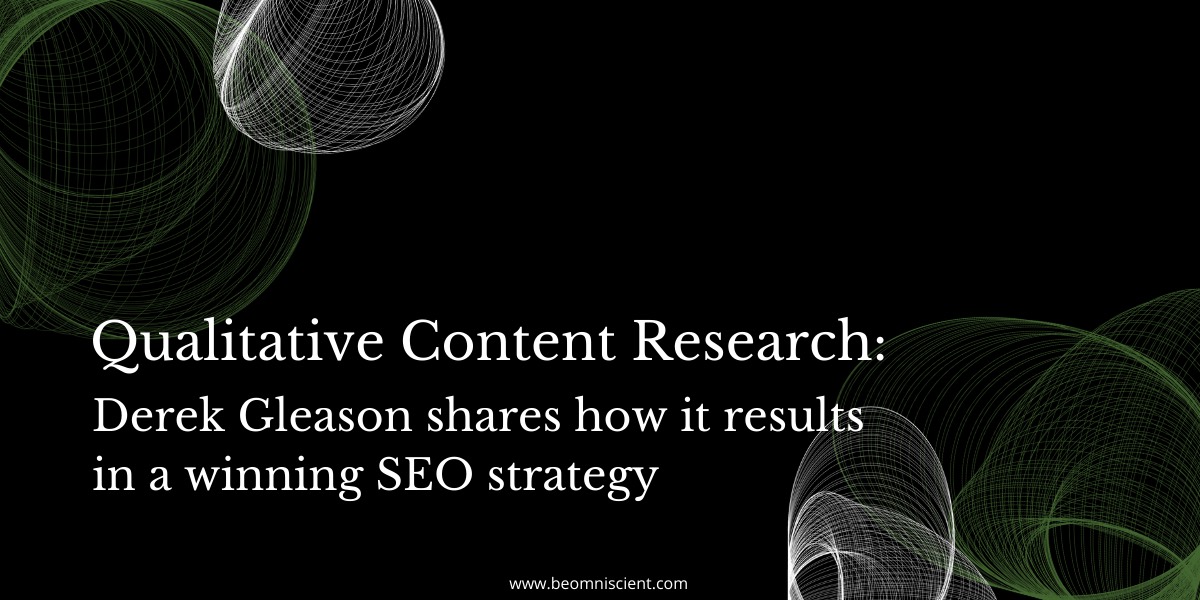 It’s 2021. Hopefully, no one is still hitting ‘publish’ without an SEO Marketing Plan.

Otherwise, your well-written article will languish on the 30th page of Google search results – useless to you and your readers.

But when everyone’s playing the ranking game, can mid-tier sites still score points?

For Derek Gleason, SEO whiz at Workshop Digital, the answer is yes – if you’re willing to swap out quality over quantity. And you might want to put your current tools to the test, too.

Every content manager loves an automated tool. But do those tools love you back?

Because they need to pull huge amounts of data to attract a bigger audience, most marketing tools limit your insights to their own pre-set metrics.

These platforms go for the lowest hanging fruit – so B2B companies dreaming of getting LinkedIn analytics are on their own.

Your CMS is handing out engagement scores left and right. But what’s behind those tallies?

Content data is scored according to a subjective – if not arbitrary – equation of metrics, and links meant to prioritize simplicity over usefulness.

“All these tools are growing by attracting really entry-level people. So when it comes to taking the data points they have, they’re not manipulating them in interesting ways. They’re not creating their own internal algorithms to kind of elevate different, interesting types of content. They’re just giving you this kind of pile of data,” said Derek.

There’s plenty of pre-existing factors that skew content rankings based on anything but the quality of the article.

Most critically, large news sites – such as The New York Times – or industry leaders who benefit from a built-in audience of readers. That means the content is liked, shared, and linked almost automatically.

As another drawback of this system, innovative ideas tend to get left behind as rankings are determined by the standard keywords already in use.

No matter how clever your analytics platform seems, Derek believes spreadsheets can only do so much with raw data.

In the world of a billion articles, only a creative approach can help you find the content that differentiates you – and gives your content a chance to reach the top.

And that’s the difference between the quantity and quality of your data.

“Quantitative data can be a baseline. But real success is about doing really, really good creative problem-solving work. And that requires that qualitative analysis,” explained Derek.

Who’s going to crush the SEO game? The content strategists who are willing to apply creativity to the metrics.

Filtering for the right results

You’ve generated a massive list of top-ranking sites and articles. Now what?

Raw data can be overwhelming to parse, especially if you’re trying to crack the code to successful content.

Derek has a better idea than scrolling through 3,000 URLs. He recommends adding your own metrics to sort, clean, and leverage usable data.

“Ultimately what we want to do here is do something that’s a little bit unique. So if you’re doing, again, the exact same thing as everybody else, you’re not going to get to that point of differentiation. As you think about that, just think about keeping it simple. How can you add one column, two columns to a spreadsheet to give yourself a better dataset, a unique data dataset, and really give you a better baseline for doing qualitative research?” Derek said.

How do you separate truly awesome content from articles lucky enough to sit on a big site?

Go back to your handy data filters.

First, compare the number of referring domains to organic visits.

Organic visits can be from a user that clicked on an already ranking article, biasing results for those sites sitting on the top.

“The metric that is referring domains, organic visit – the higher this number is, the more likely it is that this content earned links without any kind of organic support. So basically this thing shows up nowhere in search results, but it’s still earning tons of links. Which tells me there’s a really good chance that this thing earned links because it was awesome, because it was really, really interesting to people. They went out of their way to cite it,” Derek said.

Referring domain metrics will show you if this content is being suggested, shared, or published off of search results. That’s a good sign it’s worth a read.

Here’s where the human element comes in.

Categorize and sub-categorize your relevant articles to tease out potential themes. The more you can code out, the better you’ll understand the topics that pull in readers.

“What I have is a list of improved quantitative data that is unique to me because I’ve put in these extra metrics, and now I’m going to go through and look at those titles and start to code this data. And by coding the data, all you’re doing is you’re looking through title by title, and you’re saying, okay, what’s the theme here? What’s the topic?” said Derek.

Once you’ve narrowed it down to 6-10 themes, you have a starting point to plan your data-backed content strategy.

You don’t need to limit yourself to SaaS toolsets.

If you really want to see how, why, or which parts of an article got people buzzing – read the reader responses.

Sites that have upvoted and responsive comments are the best because then you can code the comments according to popularity and interactions.

“Instead of just looking at a blog and seeing their 50 comments on it and trying to guess, ‘Hey, which of these comments do people care about? Do they disagree with that? Do they love it?’ You can actually use the uploading system within the comments section to get a sense of which aspects were really most important. So you get the context of specifically – how are people reacting to this article? What are they saying about it? And in general, for the total audience that was here, which aspects of that commentary really resonated the most?” said Derek.

Want to double-check your content strategy? Just Google your keywords.

The actual search results will show you what type of content and media is being prioritized by Google – based on their own data. And that means you can make sure to fit yourself in for the user experience in real life.

“There’s nothing in this query that specifically says, ‘I want some kind of visuals,’ but the very first thing that Google returns is three rows deep of images. So right away, I’m thinking Google has a lot of data that suggests that even without an explicit intent and the query, people want a visual. So there’s no way I’d even think about creating content on this unless I had some kind of downloadable PDF or something that is really, really visual that I could succeed within image search. Because a lot of these clicks are going to flow straight to images,” explained Derek.

Sometimes, only a ‘boots on the ground’ approach can give you the lay of the SEO land.

Get into the conversation

The most accurate way to parse why content succeeds?

“Even if you just go on Twitter, just drop the URL into the search on Twitter. It’s going to show you everyone who shared that. And it’s going to give their little snippet about why they shared it. So it’s going to allow you to layer in some of that data, that qualitative data of like, ‘oh hey, this didn’t just get shared. It got shared because…’” Derek said.

If content did resonate, you should expect to see a conversation about it online. Search social media sites by URL to view the buzz, and figure out what makes users click, click, and click.

To learn more about how we do content research and help you create stellar content, set up a free strategy call with us.

034: Building a Thriving Career as a Wordsmith with Juliana Casale (Content Strategist at Wave)