034: Building a Thriving Career as a Wordsmith with Juliana Casale (Content Strategist at Wave) 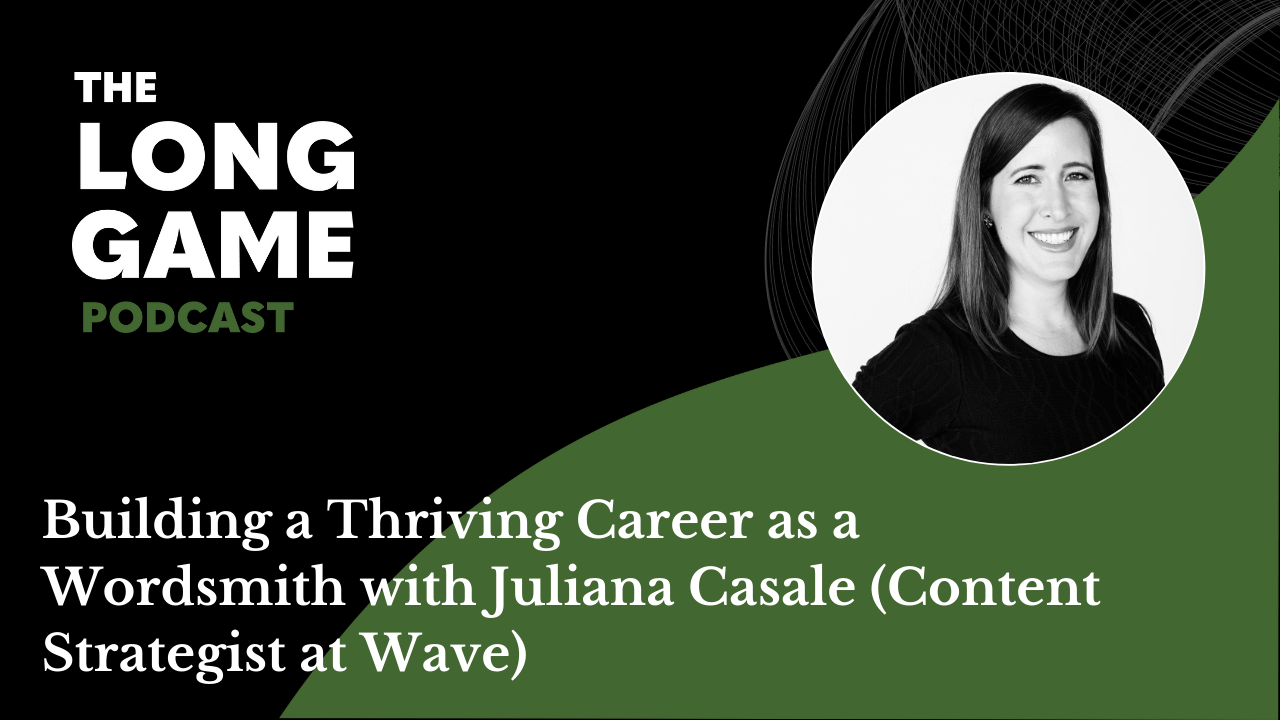 How much does self-professed “word geek” and bibliophile Juliana Casale love writing? So much that she’s done pro-bono writing in exchange for free passes to beer festivals. Yet she’s come a long way since, thanks to her talent, work ethic, and a zeal for embracing new challenges.

For the past ten years Juliana has held roles at a handful of small and mid-sized B2B SaaS startups, as well as running her own freelance business. Currently Juliana is a Content Strategist at Wave, an all-in money management platform for small businesses.

In this episode Juliana opens up about her journey to her current position, her best resources for learning and staying up-to-date, and her firm belief that we are all far more than the jobs we hold.

Early in her career—when she could afford the time and money—Juliana took advantage of an adventurous pro-bono writing opportunity.

“I was in a position where I wasn’t really writing for work, but I wanted to do that for fun. And so there was this website called Americancraftbeer.com and they were trying to build up their local presence in major cities, and they happened to need a Boston correspondent when I was living there. And so I volunteered for the gig. And while it wasn’t paid in money, it was paid in passes—like media passes to beer festivals. I got to fly to Denver to go to the Great American Beer Festival there. I got to cover Bonnaroo as the beer correspondent three years running. So that was well worth it. I got to interview really amazing brewers and talk about different trends in the industry.”

To prioritize an endless workload, direct your first efforts towards the most pressing need—in Juliana’s case, Wave’s website. Once the smoke clears, focus on those areas with the most opportunity.

“I’ve been at Wave for six months, and so far I’ve been very focused on our website content. Before I joined, the website hadn’t been touched in at least a couple years, which is a little terrifying when you think about how you change your branding over time. You have new products or features you want to talk about, like there’s a lot that’s evolved, and the website hadn’t caught up to that. And so I think everyone’s been very aware that every day that passes that we don’t update the website is a missed opportunity…The framework of ‘is it on fire?’ is a good one. Like if the website has not been updated in two years, that obviously demands more time and attention. That’s our business card online, and that’s the way people understand what we do and who we’re for and what the values are that we provide. And so that’s a pretty obvious one. I say YouTube next year, because it is a search engine. If we’re investing in the SEO realm, that should be something that we look into. I know a lot of people try to find information on how to accomplish a task by looking at tutorials. And so there’s a big opportunity there.”

“I had a friend, Devin Bramhall, who had worked with the general manager at Crazy Egg who was hiring. She tagged me on a LinkedIn post where he said, ‘I have a job opening.

I’m not going to give the job description. Instead, I’m going to ask people what their dream job is. And if I can make it happen with this role, we’ll work together to decide what the job description is.’ And so I ended up pitching him, but I didn’t pitch him on what I wanted. I pushed him on what I didn’t want. I said: ‘Here’s all my baggage from other marketing positions. I know I don’t want this, this, this, and this.’ And he said, ‘Okay, let’s chat further.’ And then we developed what I actually wanted to do. And then we turned it into a job. So that was really cool.

The best managers and directors are the ones who have put in their time at the bottom, yet can see the full picture—and still aren’t afraid (or too proud) to do grunt work.

“It’s been an interesting path where as I’ve gone from job to job. First you’re the individual contributor, then you’re the manager, then you’re director. And I found myself being pushed that way. And I didn’t really want to do that, at the end of the day. It’s a different skill set. Honestly, it’s completely different being the person just doing the stuff to then guiding other people to do the stuff. There were some days where I was just like, I want to do the work again. So when I got to Wave and we were discussing what I wanted out of the role, one thing was: I can direct people and it’s probably good to have one person where we’re partnered very closely on what should be done versus what’s being written. So I decided, why don’t I hold the content strategist role? That gives me the overview of everything that’s going on in the company and what needs to be done and what the priorities are, but I can also give very tactical feedback on the content that’s being produced and I can do more of the art direction. I’m still very involved and if I’m needed for coffee, I can still swap in the way I’ve been doing for the past month or so. It’s a nice balance, being more high-level, being the director, but of a small enough squad of two people that I’ll still be boots on the ground.”

Migrating to a new software platform is all pain with little tangible gain. Juliana likened it to transforming a terrible boyfriend into husband material…for his next girlfriend.

“Migrating from one software platform to another is something no one really enjoys but I wouldn’t want to do again. When you go from one CMS to another—we might be actually doing that soon—or email providers, things like that are no fun. And you don’t really see the results in any tangible way. It’s just, things are easier to do down the line. So I wouldn’t repeat that again, eagerly. It’s like when you date someone who’s really terrible, and then they get married and seem really happy. Like I did that! You should send me a present.”

New projects are always daunting, but you grow from the challenge, you end up with an impressive work sample you’re proud to share.

“I was just really stressed about it because I had agreed to do it. I always say yes. And then I figure it out along the way, but this one, I regretted doing that. Usually I’m like, ‘Oh yeah, I’ll figure this out.’ But this was tough. This was a beast. And I didn’t have a video background at all. I mean, the art direction part was really fun, coming up with the storyboards is really cool. And then making sense of all the footage and saying, ‘We want that. We want that. Here’s how we build the narrative,’ that was really neat. Once we shot it, I could relax a lot. But just getting all the details of where people needed to be when—that was a mess. But I was really proud of it…These things where it just seems impossible, it seems so big. And you take it one bite at a time. And then the end product, you’re really amazed at yourself and proud of the results.”

What’s your best resource for improving a skill set like content marketing? Seek out people who do the same thing as you, day in and day out.

“Most of my learning comes from networking with other marketers. So there’s definitely a ton of Facebook groups, Twitter groups, Slack groups. I’m part of a Slack community called content marketing leaders that’s mostly Canada-based, but there are some US people in there too. It’s just amazing for resource-sharing, asking questions, sharing wins, things you’re proud of, job opportunities. It’s so active and engaged and friendly. And there’s no stupid questions. Odds are that people have asked the same thing you’re asking. And so you can always search for answers to things, which is really nice.”

It can be hard to separate who you are from what you do for a living. But Juliana believe people are much more than the sum total of their job.

“Don’t tie your worth to your work. I struggled with that. It’s absolutely excellent advice. Your job and what you do for money isn’t who you are as a person. But it’s the majority of the time you spend on this planet. So it’s really hard to disconnect those two things. I’ve been through three layoffs and it’s a hard lesson to learn, that if you have a company that you report to, at the end of the day, they’re going to do what’s in their best interest and you have to do what’s in your own best interests.”

When you know what you’re good at and own it, you’ll feel confident to charge what you’re worth…and get it.

Being your own boss is a whole other challenge, but you own your worth and you can absolutely forge your own path if you have to. Having that confidence in yourself and your abilities and just knowing that you’re good at what you do and just kind of owning that is so important for being confident. And I think it’s gonna trickle down to things like job negotiation. When you’re trying to figure out what your salary is, if you have that confidence in yourself, you’re going to advocate for being paid what you’re worth. Or if you’re doing freelance work, same thing. I think it’s really easy to lowball yourself and that’s just going to hurt you in the long term. Recognize what’s the worst case scenario, and say you can recover from that and build your own path if you need to. But it’s tough. It’s tough. A lot of people are tied to their careers and their professions. And I think honestly, having a baby has helped me realize that I’m more than just, you know, a marketing person.

040: From Journalism to Marketing and Keeping the Human Element in Mind with Chelsea Castle (Chili Piper)

039: Impactful Case Studies with Emma Siemasko (Stories By Us)

Ross Hudgens on How to Evolve Your Content Marketing and SEO