By David KhimMarch 1, 2022No Comments 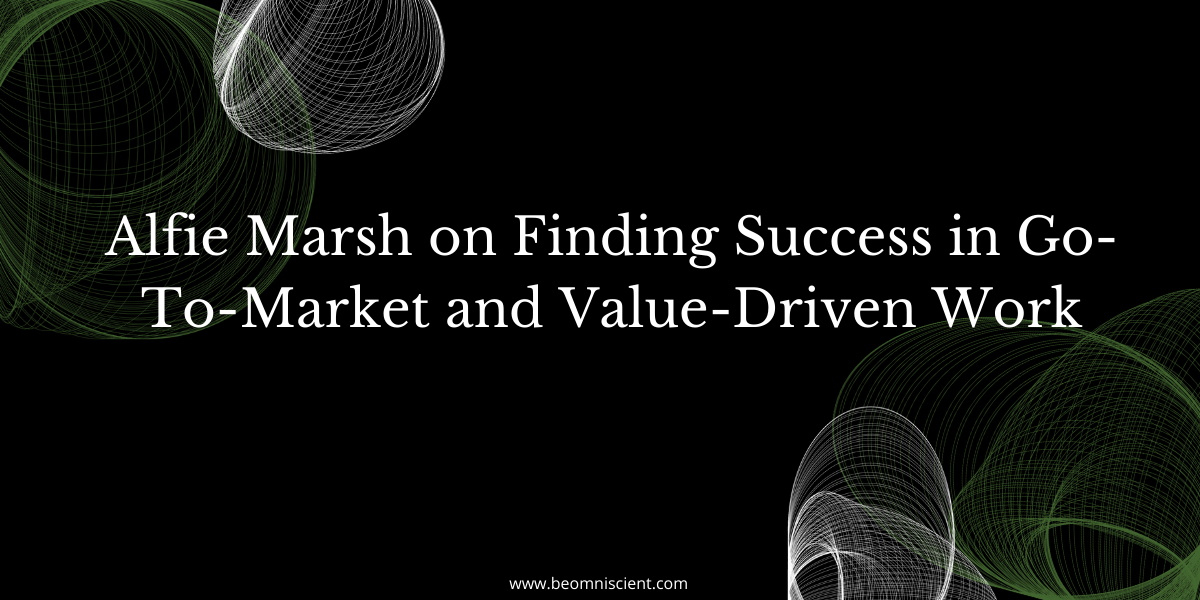 It’s about finding a career path where you’re motivated to put in hard work without crossing over into burnout. When you’re only in a job for the money, every challenge or difficult situation will push you to the brink.

Alfie Marsh, head of U.S. GTM for Spendesk, said that the key to long-term success is finding work that aligns with your values and your skills. That way your goals and the job’s goals are in sync and the hard times are manageable.

Alfie sat down with me and offered more of his wisdom about growing a career as well as his advice for companies using go-to-market strategies in new markets.

Have ownership over what you create

Hard work can take you far, but it won’t take you all the way to great success.

“It’s only really until I actually started working in the startup world where I realized that hard work is a prerequisite, I think, to be successful, but it’s actually not the thing,” Alfie said.

The most important thing if you want to have a big impact is to have ownership over what you create. That could be shares in a company or startup or having your own business.

When you own what you create, you can have an impact that goes beyond the company you’re working for.

“For me, I wanted to have an outsized impact, a leveraged impact,” he said. “And I think the best way to do that is entrepreneurship.”

That goal of one day running his own business is part of why he’s so drawn to the early stages of go-to-market work. It has allowed him to take risks and learn on the job before using those strategies on his own business.

Alfie said his ambition used to be tied to financial independence, but now it’s more about how he can use his skillset to have a global level impact.

“There’s something about having an outsized, leveraged impact in the world where you can do something that kind of transcends yourself,” Alfie said.

When he was in his teens, his ambition was tied to making money for himself, but now it’s tied to how he can benefit other people and the world around him.

“I know that I’ve got good skillsets in certain areas and it’s like, what’s the best application of that skill set?” he said. “Is it in a local area where I just do something in my local community? Or could you have an impact with that set of skills that is unique to you on a global level?”

For him, the answer is easy. If you can have a global impact and leave a good footprint on the world, that’s the path you should take.

In addition to his work at Spendesk, Alfie writes the Rocket GTM newsletter for $0 to $10 million revenue startups because he’s passionate about sharing knowledge.

“One of the reasons why I write newsletters or post on LinkedIn or produce content is a lot of the work that you do within a company often stays within the company,” Alfie said.

“No one else can either know about, learn about, or benefit from what you’ve learned unless it’s shared externally.”

That sharing has non-altruistic benefits, too. It can also aid your career growth.

When you help a company grow, the only people who know about it are the people surrounding you. When you share knowledge, you’re also making more people aware of your achievements.

Mostly, consulting with other people doing the same work as you can make it feel like you’re part of a team. When someone else on the team wins, you get to share that accomplishment.

“I really enjoy having a conversation, unlocking some sort of thing in the way a company is positioning their products,” he said.

“Three weeks later, three months later, they have a significant change in their pipeline or their revenue because of something that you’ve discussed together. That brings me joy.”

Start from scratch in new markets

When your company goes into a new market, you need to view it as a brand new start, not just a copy of what you’ve done before.

“Ultimately you need to build the company from scratch in any new market and take it from the ground up,” Alfie said.

Some companies will have an accelerated process for this because their experience helps them to find product-market fit more quickly. But even then, you have to understand the market you’re entering.

“How big is it there?” he said. “What are your customers’ problems and how can you solve that? And does your product or solution actually respond to those problems well enough?”

Don’t make the mistake of assuming that something that works in one area of the world will work in another.

“The assumption is, well, it works here, so let’s just replicate what we’re doing and just put money into it and expect results,” he said. “And that’s never, never the case. And if that is the way that a go-to-market is operated, it’s almost doomed for failure.”

Instead, have a beginner’s mindset from day one. Start with the basic questions and principles and let that guide you.

Start with assumptions, but pay attention to the feedback

You shouldn’t replicate what you’ve done before, but starting with assumptions can actually be smart. The important thing is that you are willing to pivot based on the data you get back.

“Even if you’re really wrong, it’s a really good place to start,” Alfie said. “The point where people go wrong is where they are fixated on that. And they stay too long in that segment if they don’t have product-market fit.”

You should be looking to validate or nullify a hypothesis based on your assumptions.

“You can start with what works, but you just have to be in that mindset of looking out for if it’s not,” he said. “And if so, what are you doing? Are you getting the feedback?”

“If you don’t have the data coming in the feedback loop, you won’t be able to iterate or change or change the positioning,” he said. “What’s more important than getting revenue is learning why you’re getting it or why you’re not getting it.”

When you keep an open mind, you’re able to find the best options forward.