From Zero to CEO: How Eric Siu is Playing the Long-Game to Define His Career 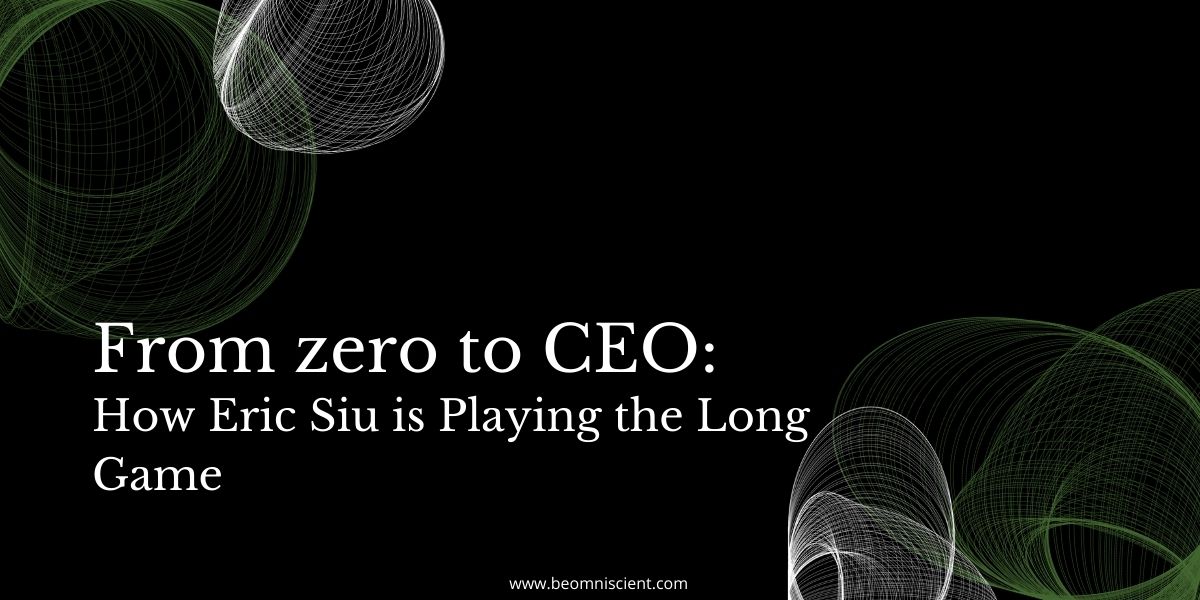 When Eric Siu graduated from college, he didn’t have high ambitions for his next few years.

A steady job in data entry, a packed schedule of video games, and a place at his parents kept his days busy.

But when he realized he was staring at a future of mediocrity, he launched a long-term plan to get to the top.

From SEO marketer to multi-business owner and industry innovator, ClickFlow’s CEO Eric Siu has advice, perspective, and cautionary tales for a career as an entrepreneur.

But how did this digital strategist learn how to effectively plan for the long term?

“I’ve just found that what works best for me is, whenever I tried something short-term, it just doesn’t work out. But whenever I’ve stuck with something for the long term, it works out better,” Eric said.

He doesn’t think he’s the first to realize this secret to success.

“When you start to study the patterns of the quote-unquote ‘most successful’ people in the world, whether they’re investors or entrepreneurs, usually they just stick with something for a long time and they figure it out,” Eric said.

The best part of failing often is the free education that comes with it.

Whether it’s an under-achieving co-worker or your own business mistakes, Eric believes in letting failure not only motivate you, but also make next time a likelier success.

“I was actually telling my team today cause we’re working through an integration right now because we just bought another agency. I was like, ‘Hey guys, here’s all the things that went wrong and just go the opposite direction, just invert this.’ And so we had the playbook on how to not do it,” Eric recalled.

Even if all you’ve learned is what not to do, your mistakes were worthwhile making.

But Eric learned from a fellow founder that there’s another way to push yourself.

“We had the founder of Activision speak and his mission is to help entrepreneurs achieve their dreams. And at the moment I was like, that’s not specific. People talk about specific goals. They talk about smart goals and all that,” recalled Eric.

“It was what he said right afterward that really resonated with me. He’s like, that’s what a mission is. It’s not supposed to be achievable. It’s something you can wake up to and get a little closer to every day.”

By swapping goals for a personal mission, you’ll feel more passion about the steps towards your dream. Even during the day-to-day grind.

Level up instead of moving on

Why would a gamer-turned-CEO publish a coaching book called, “Leveling Up?”

Because leveling up is more than the snappy phrase behind Eric’s unique business perspective.

Instead of running through multiple industries and companies, Eric recommends buying in for the long term.

“Like the private equity model would be buying a business and flipping, right. I don’t think there’s anything wrong with that model, it’s not for me. I’m much better just buying something, holding it, and growing it. And that’s very much what leveling up is about. It’s buying something, holding it, and then just continue to get better and better over time,” explained Eric.

Go high-leverage with your time

For a busy entrepreneur, prioritizing work tasks can be a daunting challenge. With only 24 hours in the day – even the most efficient owner needs to learn where to focus.

The key tip: uncovering where you make the most personal impact and starting there.

“It’s really those four things. That’s where I can have the highest kind of impact. Like sure, I can do everything. I can jump in. If someone needs me to screen someone, I can do it. But that’s not the best use of my time,” Eric said.

Swap out books for peer groups

There’s no shortage of business advice on the bestseller list. Some of it may be worth reading. But don’t fall into the habit of staying by the books.

There’s nothing like learning from your mistakes – or other people’s mistakes. Connect with your peers or attend conferences to gain insight from the entrepreneurs ahead of you.

“I was 26 or 27 at the time when I took over Single Grain. And these people were like in their mid-thirties, forties, fifties, and they just taught me a lot. And I think learning from the wisdom of others or your own peer group or going to conferences like the Ted conference, I think these are all worthwhile endeavors and it just makes you a better person. At the end of the day, is what you’re doing going to make you a better business person and also just a better person in general?” Eric said.

If you have access to any seasoned professional, you can get a lot more value from a conversation than from the latest book. And it may even be cheaper.

Eric thinks fans need to think more selectively about the “celebrity favorites” in the business world.

Leaders like Bezos or Gates are often role models for entrepreneurs, but as recent scandals show, they also have some failures on their track record.

Instead of Forbes list loyalty, focus only on the traits or messages that made them successful – and skip the celeb worship.

“You look up to certain aspects of people, not every single thing. Right? So maybe I might disagree with some people on some things, but I might look up to them in other ways.

You might look up to the Warren Buffetts, Jeff Bezos, the Elons of the world just because their thinking is so long-term, and it’s different from other people. So you want to zig where other people are zagging. I think for me now, the focus is becoming the best version of myself or continuing to do that,” said Eric.

Of course, admiration is only your first step. Applying their secrets to success to your own self-improvement is the real game-changer.

The perks of social butterflies

Introverts, rejoice. You don’t need to be a schmoozer to get a warm reception from your peers.

Coordinate informal events to connect all your great contacts – and reap the benefits of helping your network.

“If you’re the connector, everyone will remember you, and you just kind of continue to connect people. It’s free to connect people. So I find that whatever it costs to pick up the bill, it’s easily worth it because it’s an interesting conversation that you’ve curated and it’s a good experience that you created,” Eric explained.

And while most of us wouldn’t link a dinner bill to a business deal, Eric recognizes that valuable relationships – like business strategies – can be a long game in the making.

From Content to Poker: Clearscope’s Bernard Huang Explains How a Solid Strategy Helps You Win

Hiring a Freelancer vs. Agency vs. In-House Marketer: Which Is Better to Supercharge Your Content?