By Allie DeckerAugust 16, 2021No Comments 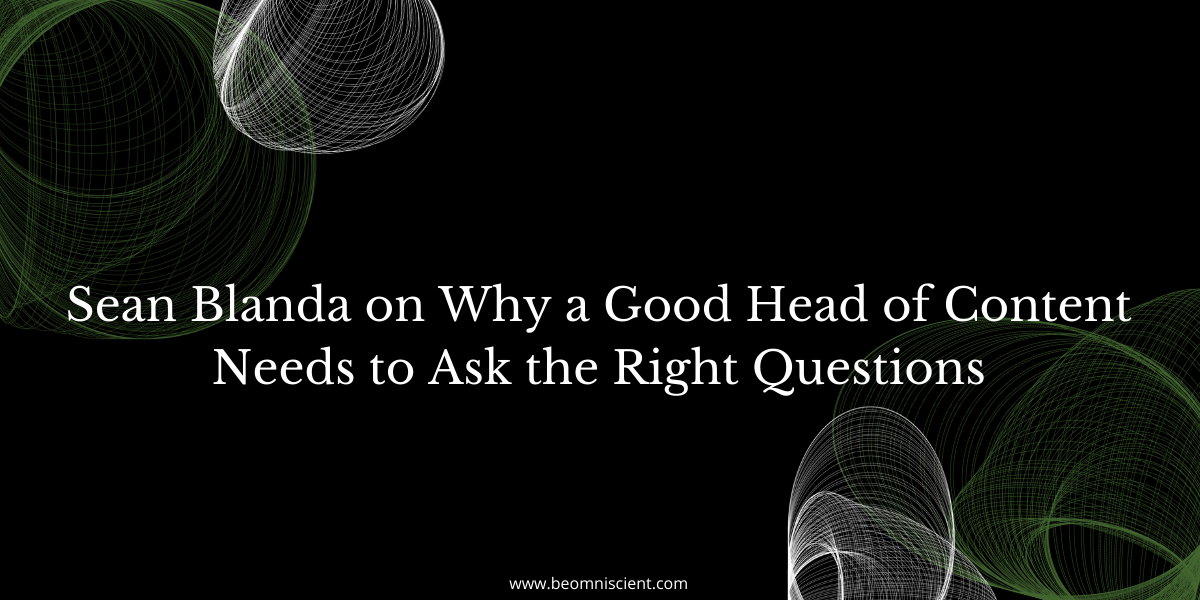 A Head of Content has a lot on their plate. From big picture strategy to itty-bitty edits, their job is to shape strategy as well as execute it.

I started by talking to Sean Blanda, Director of Content at Crossbeam.

Sean’s approach to being a content marketing leader can be distilled down ito one key theme: ask the right questions.

Most people don’t plan on becoming a Head of Content.

Often, the seed of a successful Head of Content starts with someone who loves writing. It can be a big leap from being writer X on a content team to director.

Sean’s made that leap—and within the same company, no less!

When he worked at Adobe, Sean started as the associate editor, which was at the bottom of the content totem pole. By the time he left, he was the director.

“It’s kind of like you rent a house for a while and you get the idea of how to rearrange your perfect house. And you’re watching HDTV and you’re like, man. If I had my own house, I would do it this way. And then someone just gives you the chance to build your own house. That is exciting and extremely creatively fulfilling,” he said.

He views the opportunity as a way to create your ideal team and ideal content program.

“That’s one reason I love working at Crossbeam is I was the first content higher, so I could help guide the initial strategy. I’m not moving into someone else’s house, I’m building it,” he said.

If you’re tackling a new role as Head of Content, know that the earlier you map out your content plan and how you will measure it, the sooner you can present it to executives and move forward with confidence.

“I would say the best thing is having have all the fights early, and have a discussion early. Be really, really candid about, we’re going to do this quarter. And we’re going to do this next quarter. This is how we’re going to measure it every month. If you don’t have a quarterly plan and a yearly plan for your team and your executive team isn’t signed off on it, you’re just asking for misunderstandings,” Sean said.

Sometimes, companies don’t have their mission and goals as dialed in as they think they do. Content marketers can help that process by asking the right questions.

“I’ve been at companies where by virtue of making an editorial strategy, you ask some pretty tough questions. Like, who are we targeting? What do they care about? What do we want them to know about us? It has to be one thing. It can’t be 10 things. Sometimes you can force that value discussion for a smaller company, but you need those values,” said Sean.

One thing he tries to do when starting at a new company is write up a  two-page brief outlining the company’s values, target audience, and pillar campaigns he plans to roll out.

A great way to get buy-in from the higher-ups?

Ask them for examples of content they love, then break it down by showing them how it’s working to appeal to them in qualitative ways.

Maybe they love the content published by Stripe or Adobe. Have executives point to specific examples of content they love.

“Then you’ll be able to prove like, ‘See that piece they wrote that you liked? That’s just for conversation. That’s qualitative, because their audience was asking you for it. There’s no keyword attached to that. They’re not pulling a bunch of data from their apps. They’re just writing something that they think the audience would like, and you were the audience,” Sean said.

The goal in asking these questions is to make executives understand that when they’re on the other side of the equation, when they are the audience, that content that isn’t necessarily measurable often resonates with them.

Let your audience guide you

When Sean hears a problem theme come up multiple times within Crossbeams community of users, he knows it would make a great piece of content.

“The data should support what the community is saying. As an example, the community said to us time and time again, ‘I feel lost. There’s no roadmap for this job. I don’t see a lot of guides out there. I’m kind of stabbing in the dark. I don’t know how much to pay people I hire. I had nothing,’” Sean said.

“That tells me I need to pull the data of salary information for this group, or I should put out a survey about common struggles, so we can then write the content that caters to them.”

Everything is led by what the audience is telling him.

In his eyes, your content platform should prioritize the voices of community members rather than just brand-driven agendas.

“Always lead with the voices of others. Because people reading your site or going to your event, they’ve already opted into the way you think. They don’t need to hear it again. Instead, you should make use of your platform for other supporting discussions,” he said.

As a content marketer, you don’t know all the things you think you know. So get the community to reflect it back to you.

Think of your content team as a creative studio

When he was working at InVision, Sean broke down his focus into buckets of time for internal requests and external projects.

This mindset ensures you have time for the higher-level creative work that will help your team and professional skills grow.

“In many software businesses, the content team is essentially like an in-house creative studio. And I try to treat it that way. When internally our clients say, we’re launching things. This is why we think it’s important. And we can say, all right. Here’s how we think we should execute it. And then we work together to do it,” Sean said.

InVision was an enormous company, and it would have been all too easy to field simple internal requests all day, every day.

“You can get very easily mired in people asking you for designs, for copy, for blog posts. And you could do that all the live-long day. But I don’t think you advance your career in your team in the company by doing that. I always found it good to separate it and say, this is internal work and this is external work,” he said.

One way to go about that is by setting aside a dedicated number of hours from the workweek to internal projects versus seeking out ideas from external sources.

Sean had yet a wonderful analogy for running a content team: it’s like hosting a dinner party.

All the focus should be on making sure your guests (aka team members) get lots of attention and leave wanting to come back again.

“When you host a dinner party, you shouldn’t be the star of the dinner party. Your job is to make sure everyone else is having a good time,” Sean said.

“That’s the dynamic I think a good Head of Content does. They create an environment where the people below them can be superstars and successful.”

The key is that being the host of the proverbial dinner party should feel fulfilling to you in its own right.

If you find yourself missing writing or feeling creatively stifled, it could be time to reassess your balance of projects or even your overall interest in the role.

Leading a content team means putting your team first, asking them how they’re doing, asking for their ideas, and treating them with respect and empathy.

When you remember to ask the right questions of everyone in your content world, you can truly create content worth talking about.

025: From Creative Contributor to Creative Catalyst with Camille Trent (Head of Content, Dooly)