From Content to Poker: Clearscope’s Bernard Huang Explains How a Solid Strategy Helps You Win 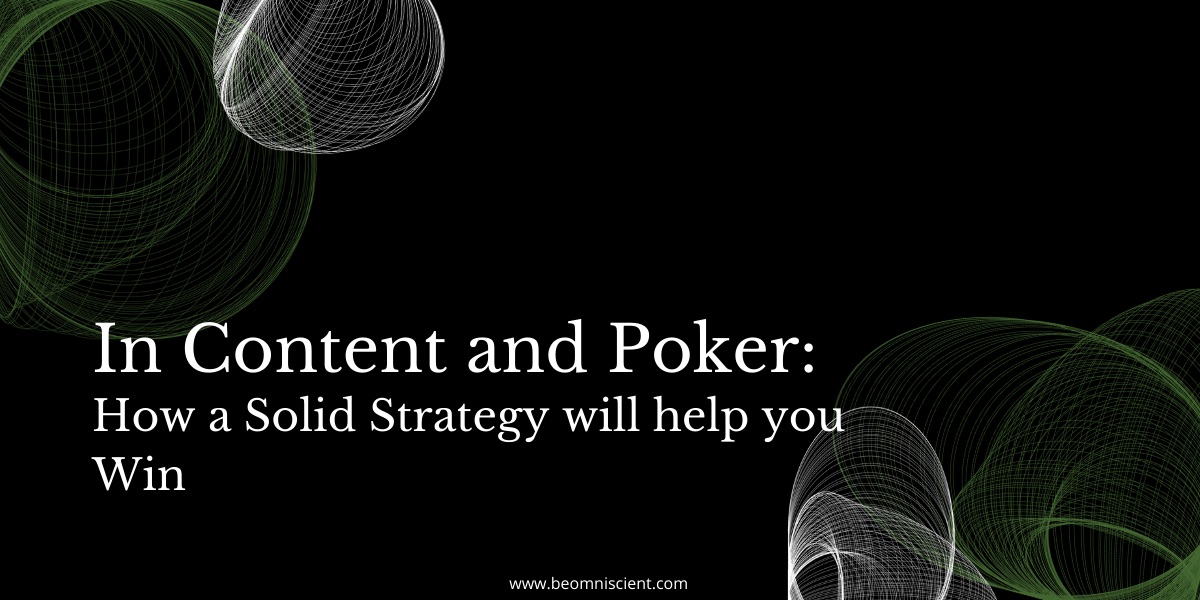 There are few certainties in business.

But according to Bernard Huang, a few truths are self-evident.

The co-founder of SEO optimization platform Clearscope, Bernard shared the above life lessons with me as a recent guest on our podcast. Listen to the episode here.

He also shared his take on what’s important if you’re starting a blog or creating a brand.

Starting your own business can feel like the ultimate gamble.

But Bernard, a regular poker player, said that there are similarities between poker and entrepreneurship beyond the bet.

Just like how a game has a series of rules you must follow to win, so does business. They also both have a set of moves that can be leveraged to win.

The best way to approach decision making in business and in a poker game is to come up with a set of strategies that have a higher likelihood of guiding you toward success.

When you have a system you follow, it keeps you focused and prevents you from being paralyzed by all the different possible outcomes.

“I talk about it from time to time, but the gist of poker is that people are not losing poker players, people employ losing systems in poker,” Bernard said. “And that is fundamentally how you improve at poker or now you could then extrapolate that and say at anything.”

The content that is ranking highest is often perspective-based and rooted in experience instead of the run of the mill “Top 10” lists that used to dominate the coveted space.

If a company wanted to regain their spot on the results page for a topic, they could test this approach with 5-10 different pieces and see if it also works for them.

“They say, ‘Oh man, I’m so bad at content,’” Bernard said. “And it’s like, no, no. Just the framework that you’ve been employing has not been effective. So let’s fix that and see whether or not our results change as a result of that particular shift in thinking.”

Regardless of what new thing you’re trying, whether it’s a new type of content, learning guitar, or trying to master sales, one thing is for sure:  you’re going to suck at first.

But don’t give up when the going gets hard. It takes time to determine if a skill or project is right for you.

“Accepting that you’re going to suck at whatever it is that you do for a fair amount of time before coming to then understanding the true essence of what you’re doing is something that I think people who are skilled at learning have already just completely internalized,” Bernard said.

For instance, when Bernard started Clearscope with his co-founder, he became the main salesperson, which was something he’d never done before.

He got rejected over and over again until he hit a point when he felt like he truly hated it.

But then he broke it down and thought about why he hated it so much. Was it because he hated sales in general, or that he hated sucking at it?

“Maybe it’s because I actually don’t like doing sales or maybe it’s because I’m not finding success at sales, which I think is different than sucking at sales,” Bernard said. “It’s sort of like an outcome versus a skill or something like that.”

Give yourself some time before you try to make that assessment.

Learn from the experts

When you hit a wall with a new skill, using books and research to figure things out only works for some people.

Many people will benefit more from talking to an expert.

“I feel like this is where, in my opinion, school fails you, is that for a lot of different personality types, they don’t really do a good job of hammering home the ‘why’,” Bernard said. “There’s just no, don’t do that, period.”

In school, we’re often taught simplified shortcuts to understand concepts instead of deeper understanding or the ability to teach ourselves.

Bernard has found that when he’s learning something new, it’s best to try it out for himself first and then go to an expert with his questions.

“The best way that I found for myself, and this is going to vary from person to person, is to go out and ask the people who are perceived to be the best at X that I can get ahold of and say, Hey, you know, I just want 15-30 minutes to get your eyes and ears on X.”

Having a call or coffee with someone is a great way to get unfiltered information on a subject that you wouldn’t get from a book.

As Clearscope has grown, so has its team. This means Bernard’s role has shifted to a higher-level focus on branding.

Usually driven by statistics and numbers, Bernard has discovered that a brand is built on the way people feel about it as well.

Now, he’s interested in understanding why people enjoy Clearscope over its competitors and what fuels that positive feedback.

“Why do people pay a ton more money for a Lexus in comparison to a Toyota?” he said. “It’s functionally the same. It gets you from point A to point B, except people feel better when they’re driving a Lexus to work.”

He’s currently working with his team to figure out what intangibles they can offer as a brand to boost those positive feelings.

Bernard is trying to narrow down who Clearscope’s best customers are instead of taking on just anyone as a client.

While it might seem counterintuitive to discourage a potential client, it will actually benefit both company and client in the long run.

Bernard used the example of a local plumber who wants to rank for the search term ‘plumber’ in their city.

Clearscope isn’t the right tool for that. A small local business is going to rank with local citations and good reviews, not content optimization.

So Clearscope says exactly that upfront. If the customer still chooses to buy the product, they will in theory be more understanding when it doesn’t work for them, because they were given that information at the beginning.

Without that transparency, Clearscope could end up with unhappy customers who leave bad reviews about how their product doesn’t work.

Use price to qualify customers

A great way to qualify customers from the very beginning is with your pricing.

Clearscope has a high entry price, and that’s helped them to find good fit customers who will benefit the most from their service.

Are they the most expensive tool within content optimization? Yes. But a lower price point could cause an influx of bad-fit customers who want to use it for a small local business or who expect the content to write itself.

“We look then at this $170 starter tier that we have,” Bernard said. “And so this is great because it disqualifies a bunch of really bad fits that are going to eat customer support time, my time, training them, all this overhead, and mental well-being.”

The lesson here is that bad fit customers don’t just leave bad reviews. They also take resources away from the best-fit clients that you want to build your business on.

Clearscope’s focus on a clear strategy weaves through everything they do.

It’s how they approach content, customers, and the product they’re building.

When they’re deciding what new features to add to Clearscope, they follow Google’s guiding principle.

It would be easy to give in to every client request and add non-stop features, but instead, they stop and analyze whether those features actually help searchers.

For example, Clearscope doesn’t include domain authority in their tool because they’ve realized that it doesn’t really make a piece of content more discoverable. What’s more important is the quality of the content.

If you’re starting a blog today, Bernard has this advice for you:

Pick something you’re passionate about. Don’t try to game the system to make money.

“You gotta be passionate about it,” Bernard said. “You gotta be in it for the long haul. Because I see a future algorithm, I don’t know how far down the line, but that basically is so good at figuring out what’s suspicious and what’s not.”

All of the junk pages filled with pro/con lists and stock images, are going to die off.

What’s going to win is real people talking about their real experiences, whether that’s product reviews, how-tos, or impressions.

Bernard said even trends in content topics are going to shorten in cycle.

“When we think about SEO at Clearscope for ourselves, we think, okay, how are we going to provide unique perspectives on things happening in content, in SEO that we find interesting,” Bernard said.

“And perhaps that doesn’t get that much search volume right now, but if it’s a unique perspective that comes true, then it will.”

Whatever your business or blog, figure out your strategies and use them to guide your path forward. If things aren’t working out, give it time, but always go back to your strategy.

Shifts in strategy will have the biggest impact.

Content is a long game. But if you want to win, play fast.