Josh Garofalo of Sway Copy Shares How to Upgrade Your Website

By Alex BirkettJanuary 25, 2022No Comments 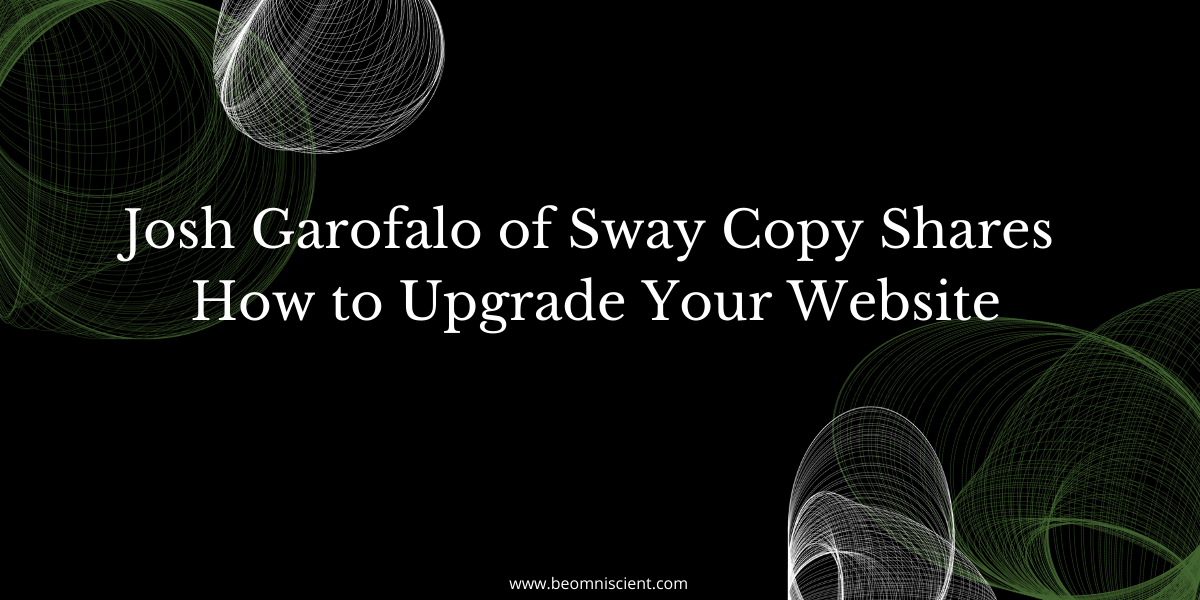 Good copywriting is about persuasion, not manipulation. It’s getting someone to do something that’s in their best interest through writing.

It’s the “best interest” part that’s important. Effective website copy moves people from Point A—where they are now—to Point B, where things will be better for them.

Josh Garofalo has spent several years learning what does and doesn’t work when it comes to website copy with his business, Sway Copy. He shared with me the human-centered tactics that are a win-win for both company and customer.

The tactics and psychological elements that help to turn a website visitor into a customer are ones that follow the basic rules of human relationships.

Reciprocity is one: you offer them something in order to get something back. Another is future pacing, which focuses on the benefits they’ll gain in the future.

“We’re all trying to be a better version of ourselves,” Josh said. “So if you’re writing copy and you can show them this is where you are right now, this is where you’re going to be, that’s also important, which kind of gets at empathy as well, which is another pretty core attribute of being human.”

If you can show people that you understand where they are now, they’ll be more likely to believe that you can get them to a better future state.

There are also mental tricks that you can use, like urgency, but Josh warns not to rely on those too much.

“I feel like maybe, at least in SaaS, people are wising up to that a little bit,” he said. “You’re typically selling to a more educated, sophisticated buyer and they can see through those tactics that might work in the health and fitness and financial direct response niche, for example.”

The best approach is to stick to the basics.

“You have a good idea of where they’re trying to go,” he said. “You have a path to get them there. You give them value before you ask for anything.”

Amp up your testimonials

One of the mistakes people make with their website copy is misusing testimonials. Testimonials can be a powerful form of social proof, but only if you apply them correctly.

The first issue he sees is companies using pithy, one or two-line testimonials that don’t give any detail. That’s a wasted opportunity to show proof of specific benefits.

The other he sees is testimonials buried down at the bottom of the page or in a scroll.

“If you’ve looked at any analytics, you know a lot of people won’t reach the bottom of the page,” Josh said. “And that they’re actually going to sit there and watch those testimonials scroll by, which if you’ve ever watched recorded sessions, you know people don’t do that either.”

The better approach is to get longer, more specific testimonials and then to use them where they’ll count.

“Make sure it’s contextual so that it’s actually slotted in alongside something you just said,” he said. “So you can build this pattern of we say something, we make a claim, and then we show you that a real customer is saying the exact same thing.”

That echo of claim and social proof is much more effective at persuading prospective buyers.

Nail your headlines and keep features together

Another mistake people make with web copy are writing vague headlines and breaking up a product’s features into separate pages.

When it comes to headlines, explicitly tell people what you do and why you’re different.

Many companies also make the mistake of listing their features by putting them on individual pages.

“What that does is unless they then go through a lot of feature pages, it gets them thinking about your product as this little point solution, when really it’s a much broader platform,” he said. “And it skews their view of the product.”

When they get to the pricing page, they balk at the price because they’re seeing it as a single point solution instead of an all-in-one solution. Their perception doesn’t match up with the price tag and they’ll walk away.

Put your value first on your pricing page

One website copy solution that addresses the mistakes above is creating a pricing page that contains both solid social proof and a clear ROI.

What most companies do is have a pricing page where it outlines the tiers of pricing, but no other context. Many people go directly to a pricing page after landing on the homepage, so that strategy leaves them in the dark about what they’re getting.

“Those prices aren’t attached to any type of value,” Josh said. “You have really no idea what you’re getting for those prices.”

Instead, your pricing page should have a headline that identifies it as the pricing page and then directly under that a testimonial or two that talks specifically about ROI.

Then outline three to six core features, benefits, or capabilities that you know people value. After those elements, you can add the pricing table.

“If someone just goes right to the pricing page, in a little bit they’ll see that whatever price you’re going to see, there’s an ROI on it,” he said. “People are getting an ROI. And they have at least a high level of what they’re getting for that money.”

Show what gaps you fill

There’s a myth that companies shouldn’t look at their competitors when creating website copy, but Josh said that’s terrible advice.

“I think the problem is people look at their competitors to see what they should be doing, rather than looking at your competitors to find the gaps that you can actually exploit,” Josh said.

For SaaS companies, that competitor research is particularly important. As the marketplace becomes ever more crowded and competitive, companies need to do whatever they can to differentiate themselves.

“I think we’re getting to this place where marketers are even smarter,” he said.

“They’re doing the voice of customer. There’s a lot of good products and now we need to help the customer not just add another solution to their consideration set, but give them permission to stop their search, which can go on forever, and just pull the trigger on one and feel good about moving forward.”

Comparative messaging is going to become a lot more important.

“That can be explicit like comparison pages, but it can even just be in your homepage, in your why us page and throughout the website,” he said.

Instead of just explaining “why us,” show how your product was a reaction to a need you saw in the market.

That was likely why you started the company anyway—and it’s one of most impactful ways to show people how using your product is in their best interest.

How to Freelance Like a Pro with Brian Speronello

How to Use Compelling Case Studies to Sell Your Stuff | Office Hours, March 2022