How to Write for Humans, But Optimize for SEO with Maddy Osman (The Blogsmith)

By Karissa BarceloNovember 23, 2022No Comments 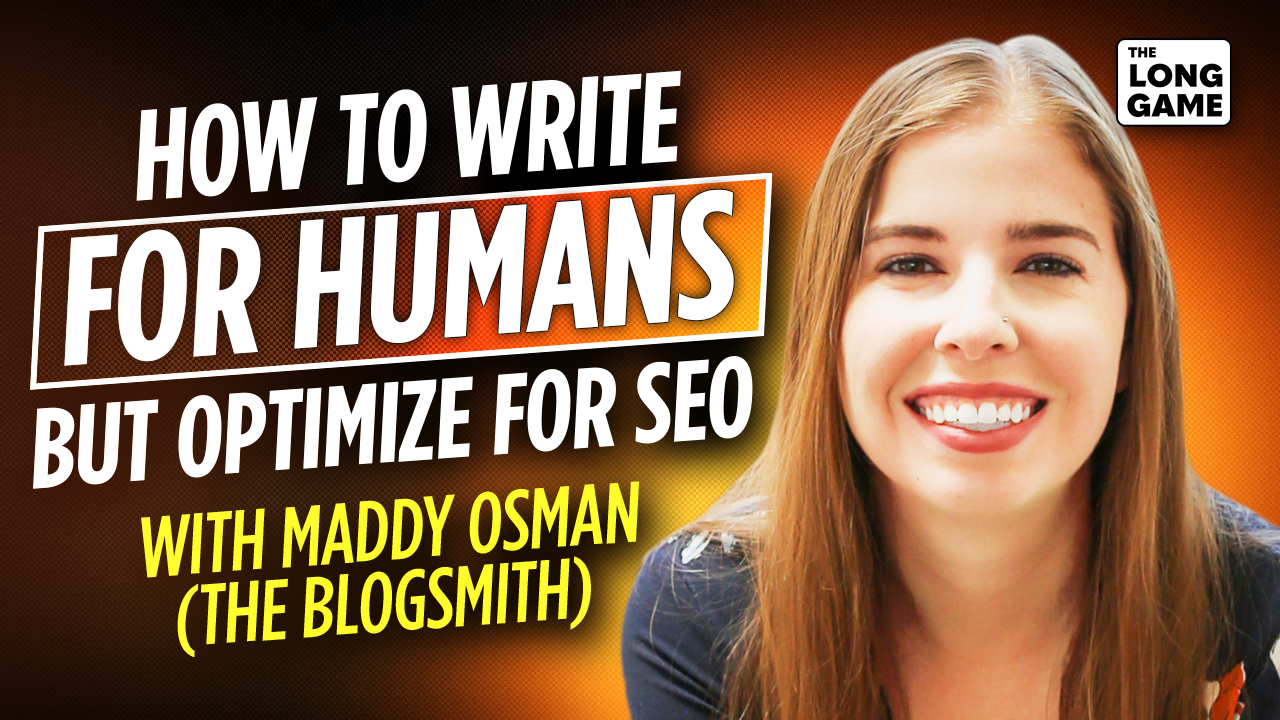 In business, there’s no way to know everything ahead of time. And while you can’t predict the future, you can influence it by learning the right lessons in the present. Maddy Osman, Founder of The Blogsmith, and author of “Writing for Humans and Robots”, has applied this growth mindset in her own work. Listen to the conversation to hear why it’s good to plan to fail, and how 1 + 1 = 3.

When building a process, it is important to anticipate problems that could arise and have a plan for how to deal with them.

“When I hear about operations, the word in general, it’s what’s everything that could go wrong? What is the normal state of affairs that we’re trying to make happen? And that Process Street reinforces the norm well. That’s the point of it for me to have a process management tool is to inforce. The norm to set expectations for what I wanna see at each level, at the outline, at the writing, at the editing stage, at the keyword research stage. But it also, the way that we’ve built it and the way that, that you should build out any process is to anticipate the problems. When I started it, it was, what are the things that I can anticipate being a problem? If something has to go for multiple rounds of edits, the status quo is that things maybe take one round of edits, but there are times where it takes two or three if it’s a very complicated piece of content that could happen and it’s not the norm. But I need to have a mechanism in place that that the team doesn’t come back to me to say what do we do? And again, the whole point is to not be a bottleneck. I don’t want anybody to be a bottleneck if we already have an answer or a possible, even something to think about. And that’s an important thing to, to consider with process creation too, is that you may not be able to plan for every single possibility.”

It is important to consider that you may not be able to plan for every single possibility when creating a process.

“You may not be able to plan for every single possibility, but the more you can do to document your response in a certain situation, the better off you’re gonna be in the future. One thing that we’ve done outside of Process Street, I’ve trained our project manager and account managers whenever you see some sort of client issue over email first of all, I wanna know about it. I’ll weigh in if I have anything that I can add to it. But ultimately, once you’ve solved it, let’s document that. Have a database that’s here’s the client question that somebody had to investigate because we didn’t have a ready answer for that specific situation. Then, here’s one thing that you could maybe do to solve it. Here’s how we did solve it. It’s usually it’s using actual examples. It’s not going to be something that helps in 100% of situations, but even if it helps in 40% of them, oh it’s a totally good use of time.”

18:35 – Figure out what you’re good at, then using it to your advantage

Not everybody has the same background, which makes it easier to get jobs in those areas.

“I realized early on in the freelance writing part of my career that the technical topics, they tended to pay better. There was maybe less competition to get those jobs because not everybody has that WordPress background or coding background. And that was that was a realization that happened by nature of diving in and doing a lot of different things and figuring out what was a. And it as I got more by ones in those spaces, it led to other things. It led to other relationships.”

If you create good content, people will find it.

“For the most part it seems it’s many things Google has vaguely told us before. Without, into the weeds of every single ranking factor. But the idea that if you create great content for humans, then it has a place on Google and people will likely find it. And what I try to, what I try to get across in the book, Write for the human, but weave in keywords. Be thoughtful about the idea of indexing, and ultimately, the robot isn’t the one who’s gonna buy from you, but they are the one who can surface your content to a human who does want to buy from you at the time when they’re looking for someone you. That’s the thing to keep in mind in writing in general it’s that the robot can’t buy from you, don’t prioritize them.”

Showing someone you’re grateful for them doesn’t have to cost money.

“I’m a big proponent of the idea of mentoring and mentorship relations. Both having a mentor, but also being a mentor. And some of the best advice I ever got was if you are working with someone who’s a little bit further ahead in their career and you want to, get that knowledge from them, you wanna connect with. You can never repay their time because again, they’re at a different level than you’re at and you’re probably, not in a position where you could pay high consulting fees anyway. But what you should consider doing is figuring out what their favorite organization is and volunteering for that organization and showing support and appreciation for them and something that’s important to them with your time instead of your money. That’s a random tip.”

When done well, the outcome can be greater than the sum of its parts.

“You can satisfy the human and the robot without taking away from either one of them. It is a balancing act. You have to be purposeful and strategic in how you do it, but it is definitely possible. Don’t get discouraged or let the naysayers think that focusing on the robot at all would be to a disadvantage to the human.”

Recent Trends and Building an Audience with Amanda Natividad (SparkToro)

Kitchen Side: How Our Thinking of Content Strategy has Evolved Over Time

How to Fulfill Customers’ Needs with CRO with Raphael Paulin-Daigle