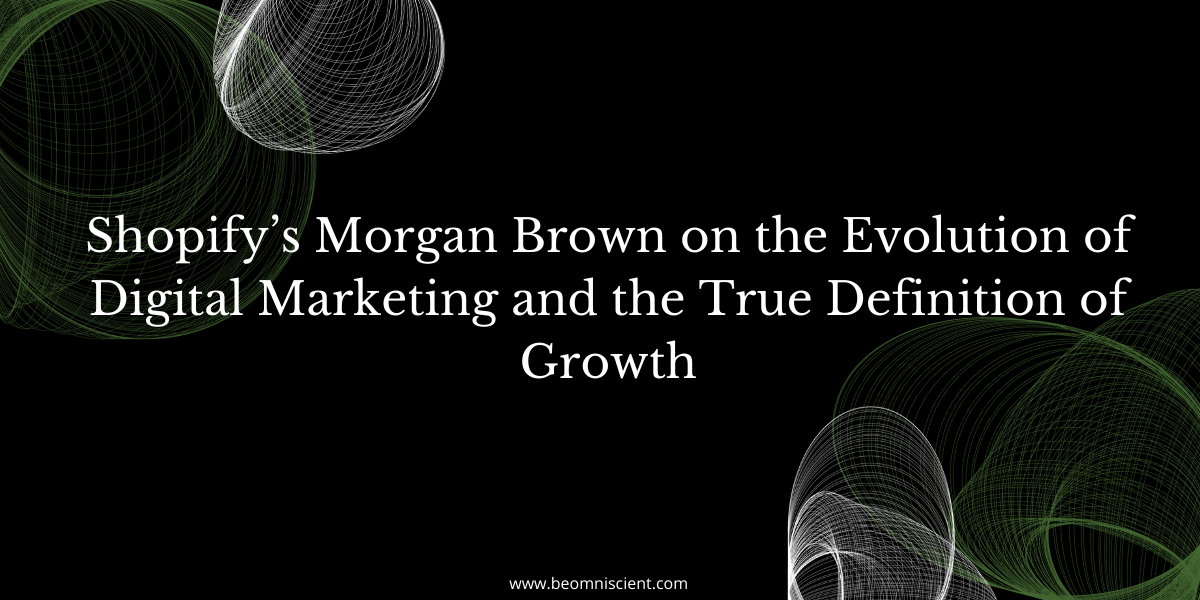 Has the word “growth” lost its meaning?

It’s a label slapped on everything, from growth hacking to growth PR. What started as a model that prioritized product and experimentation has turned into a synonym for performance.

But that doesn’t mean it no longer has value.

Morgan Brown has gone from working at agencies during the evolution of digital marketing to leading product management at Facebook. Today, he’s the VP of Growth at Shopify. He’s even written a book on the topic called Hacking Growth.

He sat down with me to share his early introduction to growth, the career lessons he’s learned, and the successful tactics employed by his team at Shopify.

Morgan can trace his first introduction to what would become known as growth to his time at a digital marketing agency in the early 2000s.

Building forums and interactive website tools led him to think beyond the traditional marketing approaches.

“That was my first exposure to this idea that you could build stuff that led to better outcomes in terms of digital marketing and success than just use the traditional advertising model of I’m going to buy banner ads, I’m going to spend on pay-per-click,” Morgan said.

It made him realize that there were things that could be done outside of the MBA definition of marketing that would drive engagement and traffic.

“They are real drivers of success in terms of digital marketing and hitting digital goals and that type of thing,” he said. “I really started to lean into what are the things we could build, whether it was a blog or a calculator or a community forum or that type of thing.”

What was true in the early 2000s remains true today: with technology innovating at a breakneck pace, there’s no such thing as a textbook approach.

For Morgan, business growth lies in constant testing and iterating.

While working for a startup incubator in L.A., James Currier came to Morgan’s office and talked about the minute-by-minute customer acquisition testing they were doing using Facebook.

“He described a situation where their team was just sitting around in a circle testing different friend invite prompts,” Morgan said. “Seeing which ones drove the most virality and literally every few minutes testing a new one and then doing the same thing with their ad copy.”

The notion of software as leverage, figuring out what makes a channel work, rapid optimization, and testing in real-time was a new piece to the puzzle.

In those days, marketing was rooted in quarterly planning cycles. Rapid iteration was a whole new world.

Modern growth teams have flourished because of the gap that often exists between marketing and product.

Morgan says a growth team itself is of little importance; what is important is to assign clear ownership to the business outcomes that get lost in the middle.

“The thing that happened was that marketing didn’t have ownership of the end outcomes,” Morgan said. “So they only focused on the things that they could influence, which were top of the funnel stuff.”

Product teams focused on building products and their vision.

“It left you with this chasm in the middle of who actually owns the outcomes of the business, and the answer was really no one,” he said.

Whether a growth team is necessary depends on what stage the company is in and what game they’re playing.

“I think growth teams overall have had a pretty spotty track record to date in terms of their success and longevity,” Morgan said. “I think ultimately it is that mental model of who owns the things that matter the most in your business.”

Now that Morgan is at Shopify, he’s learned some lessons about what works in a company that is scaling quickly.

When it comes to content, it’s having a team that focuses on how it ties into business outcomes.

“We have a team called channel acceleration, and they’re really focused on taking the largest surfaces of our customer acquisition apparatus and helping to experiment on those and identify opportunities to improve business outcomes,” Morgan said.

That team helps the editorial team at Shopify to figure out the right articles to write.

“They partner with SEO to identify net new areas to go into, cross-linking opportunities, keywords we want to go after, so on and so forth,” he said.

Use a cross-functional model to reach goals

Morgan likes to think of teams playing in a jazz band together, not swimming in their own lanes.

Shopify used to have single-function teams. In other words, content and SEO teams operated separately.

Today, they’ve learned that they’re much more effective if they integrate functions to achieve business objectives.

“One of the things we’ve done over the last year is to get them into a true cross-functional operating model,” he said, “which bring all of these collective strengths together.”

Define a north star to work toward

The hardest part of having cross-functional teams is deciding on the shared goals that everyone will pursue.

For Shopify, that north star is increasing the number of active merchants on the platform.

The idea is to standardize the way people think about the potential opportunities they have to work toward that goal, so that everyone’s speaking the same language and prioritizing the same things.

Getting all the teams to work in harmony is hard work, but it’s central to the growth model Morgan is leading at Shopify.

Growth may have become a messy term, but when applied as a mental model against clear business goals at the heart of cross-functional teams, it can have a big impact.

Content Brainstorming in a World of ‘Doing More with Less’

How to Do Account-Based Marketing: The Definitive Guide

How to Identify and Avoid the Traffic Trap