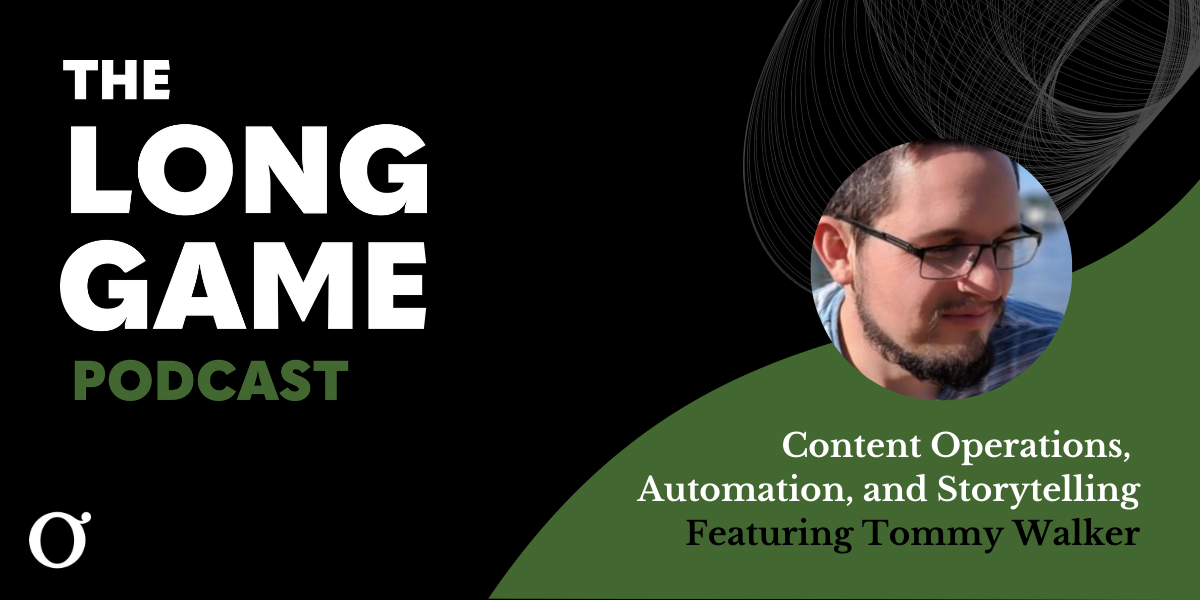 What’s The Long Game podcast, and who’s it for?

David Ly Khim, Alex Birkett, and Allie Decker interview a variety of guests in the content marketing space to talk about the mental models, archetypes, and underlying structures that allow people to flourish in the internet marketing and business space.

The Long Game Podcast is about playing infinite games in the world of content, and playing for long-term success.

The hosts of this show don’t come to this with a list of prepared questions. They let the conversation go where the interviewee wants to take it.

We hope you enjoy and get a ton of value from it.

In the premiere episode of The Long Game, the team interviews Tommy Walker, a content strategy consultant and founder of WalkerBots Content Studios.

He’s mentored Alex in everything from content operations and automation, to editorials, and managing freelance writers.

Tommy Walker was propelled into marketing after getting fired from his $12 hour job over a pair of pants.

He went on to write articles on a freelance basis, and eventually landed a role at CXL as Editor in Chief.

Tommy has a very systemic and engineering mindset, but what’s most fascinating about him is that he actually started out as an actor so he uses a storytelling approach in his content marketing strategy to get readers yearning for more.

Through strategic foreshadowing and backlinking, he’s figured out how to interconnect an entire narrative beyond just a single article. He builds a whole roadmap based on a singular topic, and each peace builds upon the knowledge of the previous weeks.

One of Tommy’s earlier jobs was working at a gas station. He had a pretty unique perspective about the whole situation.

He started using the opportunity to network with customers that came in.

He would talk to people about his passions and their passions, and eventually one of his regular customers urged him to apply at a call center. So he did.

It was timeshare. Tommy jokes he failed into marketing because he was selling intangible space for intangible property.

The job wasn’t a fit for Tommy, so he left.

However, it did peak his interest into the world of internet marketing. He dove in to learn more while he found his next job selling cell phones for a major retailer at $12 an hour.

Fired over a pair of pants.

One day, within a 24-hour period, Tommy got into a car accident during a brutal ice storm, was locked out of his house, and had to go to work selling cell phones, but he didn’t have his uniform with him.

When he got to work he asked to borrow some pants from the sales floor, and they let him.

But the next day the company fired him because they thought the whole situation seemed “sketchy”. After getting fired, he got kicked out of his house.

Tommy’s wife was pregnant at the time and he needed to bring in more income quickly.

He met a guy who was looking for someone to write articles, and he offered him $200 to write his first one.

So he wrote another one which was accepted. After that, he was recommended to write for another publication, and then another one, creating this flywheel of more sites to write for.

“I was like, okay, two articles is the oil bill. Three articles is the rent, and I was really looking at it from that very transactional perspective and just trying to get as much work out as possible with as few edits as possible, because I just didn’t have time for that. Then at the end of the year my boss said, ‘Congratulations! You have the #1 or #5, or #6 most trafficked articles on the site.”

So Tommy pushed for a flat rate salary and that’s what led him to CXL where he met Alex.

Building a system from idea to published.

CXL was growing exponentially. They were getting a lot more buzz.

Tommy was Editor in Chief and could no longer manage everything through email. He needed to come up with a file system to manage the entire submission process.

He said, “Let’s have a process that moves things from ‘idea’ to ‘in production’ to ‘review’, and  have this one visual system that allows me to keep track of it all.”

Tommy says his systems grew organically out of necessity.

“As volume increases, as contributors do their thing more regularly, we needed a system to have in place. Also, I wanted our contributors to have visibility into each other’s work too so we could have a cohesive narrative. As a guest blogger I hated pitching something and having it accepted and someone else pitching the same thing so now there is a duplicate, and I could’ve built off of something somebody else did.”

In the interview, David asks him how he begins to implement a process and if he iterates as he goes. Tommy explains it as breaking down the life cycle of a piece of content, from idea to published.

“You have an idea, so you track the idea. From there, you go into production. Then you find images, send it over the editors for full review, and really it’s just breaking down the life cycle of a piece of content, from idea to published.”

No matter how big or small your organization, the steps are usually the same but depending on how many stakeholders are involved, there may be more layers.

Tommy looks at WordPress for instance and asks how many players are involved, and who will own what.

“What it eventually evolved into for me was there were a bunch of manual tasks and even dragging a card from here to there, and adding the right people, this all takes time. It’s time away from the actual content itself, and the editing, the feedback, etc. So from there I said, how can I start to automate some of this stuff? So that now all I have to do is flip a button. Flip the status from ‘in production’ to, ‘for review’, and the card moves, the right people are added, and all of this information starts to become a little more automated.”

The rule of thumb with automation is for every task you automate, you save on average a minute worth of time.

“At my peak automation, I had two full-time robots working for me, so 80 hours worth of automation every week. It’s incredible to think about how many little tasks are involved that aren’t writing, editing, and making sure a piece is good for publication.”

He wanted to streamline that part of the process as much as possible.

Allie asks Tommy how he ensures the tasks themselves stay on time because the automation is great, but only if the tasks are getting done in a timely manner.

He’s tried to make it as simple as flipping a switch. He’s trusted the people to go along with the process because they want to get paid. They want to know he will review the content as fast as possible.

“Some of the automations I’ve had has been let’s flip this thing over and then whatever editor is assigned, they will get a Slack notification, so I’m trying to bridge all the gaps. If I say wait, it will never happen. Most of us spend time in Slack. Then it starts to move like clockwork.”

As the editor in chief who is building out the publication, he wanted a workflow process that became a habit without it becoming something that is cumbersome.

An engineer’s mind, but a storyteller’s approach.

Tommy has a very systematic approach to his work, but he also has the ability to see his publication as a story. He has great creative vision, and when you understand his background, you’ll see why.

“I didn’t start with an engineer’s mindset, I have to make that clear. I grew up as an actor. I spent 10 years acting, it was all creative. It was script analysis and feedback, and having directors tell you, ‘you suck’. That feedback was born out of critiques of performance.”

Tommy says his time at the film conservatory taught him to read between the lines and find the underlying subtext in everything.

“In every movie and every TV show there’s always a four-act structure and it includes however many episodes or seasons that you have. My concept was two-fold. We’re going to look at the year as a four-act play, and then the other concept was the Marvel cinematic universe where we’re telling one story on Mondays and we’re telling another story on Thursdays, but you have two parallel tracks where the concepts interplay with each other. So now we’re creating this net of content.”

He would build on the sequence week to week, essentially creating an overarching narrative, so it always feels like it’s building towards something.

“A lot of publications miss this in general. That feeling of something more is happening here is what brings people back. To me, return traffic is the most important thing.  If you never get that return traffic, you are never going to get to the consideration point.”

Related: Content Marketing Strategy: Everything You Need to Know to Build a Growth Machine

Tommy is a publisher who builds publications. If he were on a TV show, he’d be showrunner. He’s built his system so that if you come in late, you have the urge to go back and read more. Before you know it you have 15 tabs open because you got lost in his net of content. He cares deeply for every single thing he publishes, and that there is an interconnected narrative beyond just one article. If a website holds your reading attention, it’s likely that with time you will buy from that website.

Tommy applies feedback loops to improve his copy. He’ll have his master article, and then all the individual subheaders become its own article where it goes deeper into a subject. At the end, you have this overarching subject where all the components are interconnected.

“From a publishing strategy perspective, when you go e-commerce, you go with Shopify, because how much of your reading time have you spent on this one site? It’s about who grabs and holds your attention the most.”

Meanwhile, the engineering side became a muscle that was born out of frustration. He wants to pull the best out of his people, and help them grow. He makes sure everyone is doing their part and shipping it to market in time.

Tommy’s closing thoughts are, “Tell a story. Think about this from a much bigger perspective than an individual piece of content. Have a vision and drive towards that vision, more than the tactical stuff, because it’s the vision that will bring people in.”

To listen to the full podcast head here.